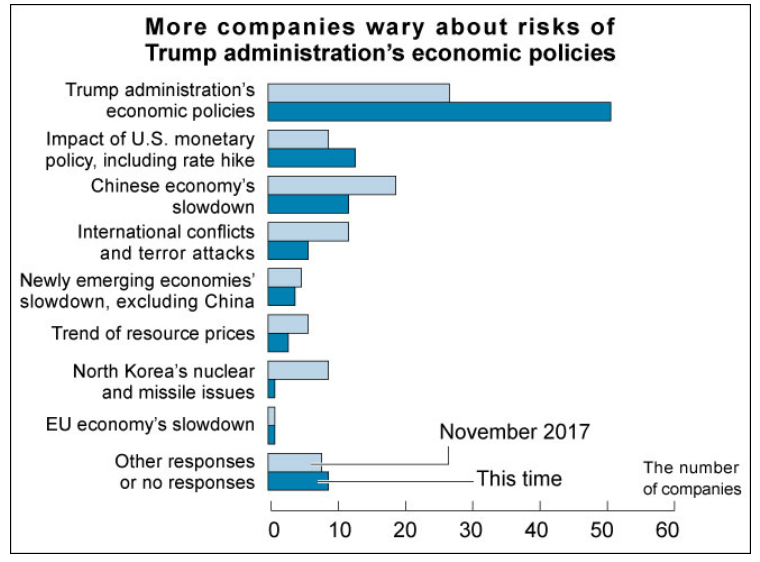 The Trump administration’s economic policies are now viewed by half of leading Japanese companies as the number one risk to the global outlook, a recent Asahi Shimbun survey shows.

The finding marks a steep increase from the last poll in November. Fifty-one companies cited U.S. President Donald Trump’s economic policies as the main cause for concern in the latest survey, compared with 27 in the previous survey.

The Trump administration has increasingly veered toward protectionism in recent months and imposed hefty tariffs on steel and aluminum imports from European Union countries, Canada and Mexico in June.

The survey also found that many companies are bracing for possible fallout from ongoing U.S.-China friction over a slew of trade issues, including intellectual property, with no immediate prospects of ironing out their differences over the subjects.

One respondent said it will have a “significant impact” on its business prospects, while 16 companies replied that they will be impacted “somewhat.”

Twenty-four businesses said that they “may be impacted.”

Hideki Kobori, president of Asahi Kasei Corp., a manufacturer of chemical products, noted that blowback will be inevitable since China is his company’s key production center of electronic materials.

“If the U.S.-China trade row becomes full blown, its impact, though indirect, will be extensive.”

“It is less likely that our company will be directly hit, in light of items imposed with high tariffs,” he said. “But we are concerned that the trade tiff could dampen people’s appetite for consumption.”

The Asahi Shimbun conducts a survey of 100 major companies in various sectors twice a year by primarily interviewing their top executives to gauge economic trends. The latest survey was carried out between May 28 and June 8. 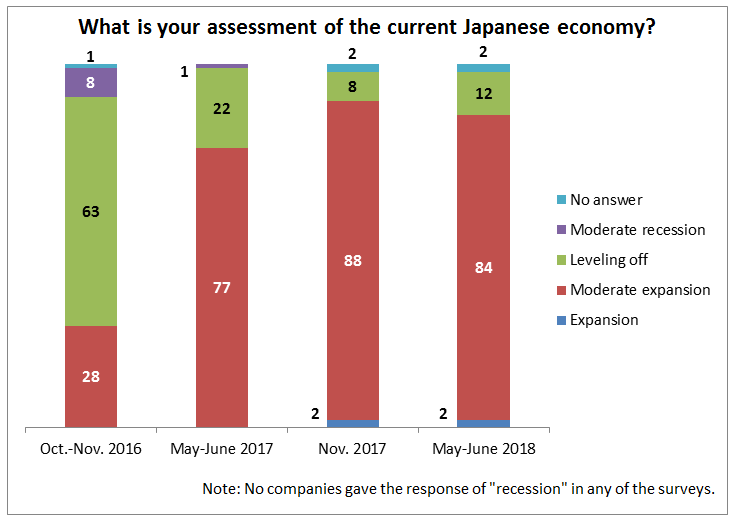 More than 80 percent of the respondents said the Japanese economy is turning around, more or less maintaining the prevailing view cited in the last survey.

The assessment cited by most, or 84 companies, was that the economy is “expanding slowly,” which was down by four from the last survey.

The number of businesses that replied that the economy is at a standstill rose to 12, up by four.

Only two companies gave an assessment that the economy is “expanding,” the same as the previous poll.

Although the government’s revised figures showed the economy in real terms contracted by 0.2 percent in the first quarter of 2018 from the previous quarter, the first contraction in nine quarters, many companies view it is a temporary deceleration.

“Personal consumption is not going strong now, but I have gotten an impression that it is growing,” he said. “Visitors to Japan are spending generously and investment in Japan is expanding.”

(This article was written by Takeho Morita and Miho Tanaka.)