Musicians criticized for crossing the line between patriotism and nationalism 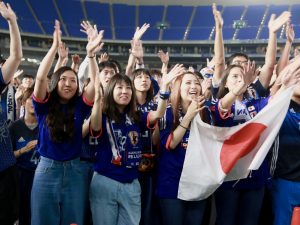 When the Japanese national soccer team beat Colombia 2-1 in their FIFA World Cup opener on June 19, fans across the nation and beyond cheered for the team commonly referred to as “Samurai Blue” with chants of “Nippon! Nippon!” But this quadrennial World Cup excitement has triggered more than just team loyalty; it has also given rise to discussions about the fine line that distinguishes patriotism from nationalism. In 2014, Japanese pop singer Ringo Shiina was criticized for her song entitled “Nippon,” which is often translated as “the Land of the Rising Sun.” She wrote the song for quasi-governmental broadcaster NHK to use in its coverage of the World Cup tournament in Brazil in 2014. Some people were reportedly offended by its lyrics, which they found to be nationalistic and reminiscent of a war song. Four years later, the Japanese rock band RADWIMPS is being similarly criticized for its song entitled “HINOMARU,” which is the name of the national flag of Japan. 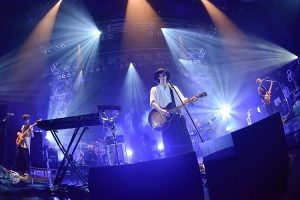 The song is the B side of a single called “Catharsis” that was released on June 6 as the theme song for Japanese commercial broadcaster Fuji TV’s coverage of the 2018 World Cup. The lyrics contain lines that express national pride using nostalgic Japanese expressions such as “the Land of the Rising Sun.” Fans of the band and other people have reacted positively to the song by saying that the lyrics are beautiful and they see no problem with cheering for the Japanese team with this song. However, some people have expressed qualms about the song by arguing that the “nationalist” lyrics indicate that Japanese youth are “tilting to the right.” 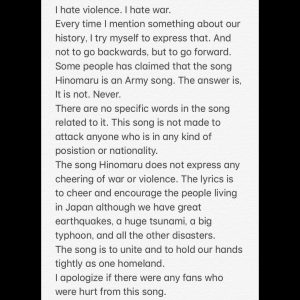 In response to the criticism that the song sounds like military music, lead singer and songwriter Yojiro Noda posted a message on Instagram on June 6 saying that the lyrics are completely free of any such ideology. However, this message failed to quell the criticism and some people even started calling for holding protests at the band’s live performances. This prompted Noda to tweet a clarification (left) explaining that the song is not intended to be an ‘army song’ and apologizing for offending anyone.

The popular pop duo Yuzu (right) came under similar criticism in April for referring to Yasukuni Shrine – a controversial site dedicated to the souls of those who died in the service of Japan, including convicted war criminals – in a song entitled “Gaikokujin no Tomodachi” (Foreign Friends). The lyrics include the following phrases in Japanese: “On TV, people talk so seriously about right-wingers and left-wingers. But the cherry blossoms I saw with you at Yasukuni Shrine were simply beautiful.” Osaka City University Professor Satoshi Masuda told Asahi (6/14) that he is concerned about the impact of criticism directed at pop musicians who try to express what he describes as “healthy patriotism.” The scholar said: “Those who criticize RADWIMPS’ ‘HINOMARU’ for being militaristic should consider the fact that there are many people who are looking for songs that inspire patriotism while rejecting antiforeignism.” 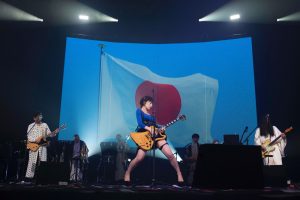 However, Asahi argued that history shows that music was used to rally militarism in the pre-WWII period. In an interview with the paper, historian Masanori Tsujita issued a warning by saying: “An increasing number of patriotic songs may be released ahead of the Tokyo Olympics in 2020. Music containing nationalistic lyrics might sell well ahead of the Olympics. Songs like ‘HINOMARU’ may incite nationalism. We should take care not to allow international sporting events to spread xenophobic sentiments in Japan.” Nevertheless, the online magazine Daily Shincho (6/14) pointed out that although similar concerns were expressed when Shiina released her controversial song “Nippon” in 2014, the song did not cause nationalism to run rampant in Japan. Echoing the opinions expressed by several musicians that Noda shouldn’t have had to apologize for his lyrics and that no work of art should be subject to censorship, the web magazine said that scrutinizing every detail of songs and other artwork could develop into the kind of censorship that was seen in the prewar era.