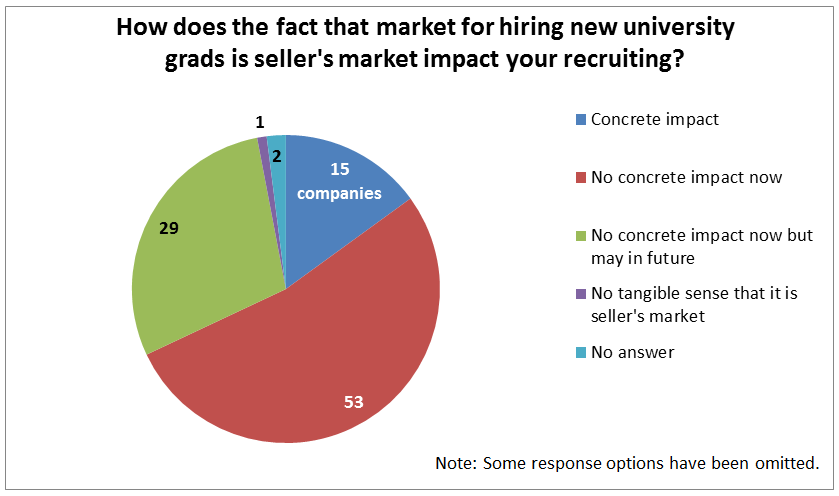 In an Asahi Shimbun nationwide survey of 100 major companies, 15 companies said the fact that the market for hiring new university graduates is a seller’s market is already having a concrete impact on their recruiting. Some companies said they have been unable to secure the number of new university graduates they wanted to. Adding in the 29 companies that anticipate the seller’s market will have an impact on their recruiting in the future, the total comes to over 40% of companies surveyed.

The Asahi Shimbun conducts a survey of 100 major companies in various sectors twice a year primarily by interviewing their top executives to gauge economic trends. The latest survey was carried out between May 28 and June 8.

Among those 15 companies that said the seller’s market is already having an impact, a food company commented, “Our group companies in regional areas are saying that more students are declining a job position in the middle of their interview.” A retailer commented: “It is getting harder to hire human resources of the caliber we seek.” A chemical manufacturer said, “We have not been able to hire the number of new graduates we wanted to in high-demand areas like IT.”

Among the 29 companies that said “the seller’s market is not having a concrete impact now, but it looks like it will at some point if the current situation continues,” one company expressed the following concern, “The more it is a seller’s market, the shorter period of time (students spend on job hunting). Companies that primarily engage in transactions with other companies and do not have contact with consumers have to fight an uphill battle.”

In this context, 88 companies said that they changed their recruiting methods and treatment of new hires from the previous year. Many companies introduced or expanded their internship programs and increased the number of company informational meetings they hold.

Some 25 companies, including Takashimaya, said that they raised starting salaries. Takashimaya President Shigeru Kimoto commented: “More students are declining our job offers, and we can’t reach our target number of hires if we don’t offer more informal offers. This trend is getting stronger every year.”

According to a survey conducted by Recruit Co., Ltd., the ratio of job offers to job seekers for students graduating in the spring of 2019 is 9.91 for small and medium-sized enterprises (SMEs) with fewer than 300 employees while it is 0.37 for major companies with 5,000 or more employees. In terms of statistics, it would not appear that major companies have a hard battle.

Chiba University of Commerce Yohei Tsunemi, an expert in job hunting, commented: “Companies increased their number of hires without changing the caliber they require. This means that informal job offers are going to a group of select students, and offers from even major companies are being declined. Some students already have informal job offer from SMEs or venture companies on the interview start day declared by Japan Business Federation (Keidanren). Major companies have a sense of crisis over this. They spice up their recruiting activities and try by whatever means to secure the number of hires they want. That is the situation today.”

Asked for their assessment of the Japanese economy today, over 80% said it is “expanding moderately.” This finding is essentially unchanged from that of the previous survey conducted in November 2017.