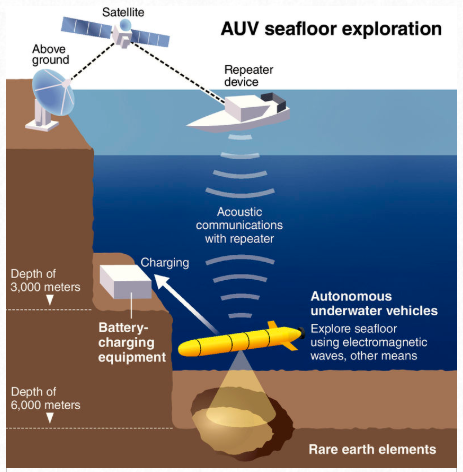 The government will launch a project this summer to develop technology to explore the deep sea at depths of about 6,000 meters using autonomous underwater vehicles (AUVs), The Yomiuri Shimbun has learned.

The government reportedly aims to put the technology into practical use by fiscal 2022 after establishing a system to enable surface-to-sea communications and underwater battery charging at extreme depths. It intends to use the technology for investigating marine resources such as rare earth minerals in the seas around Japan.

According to informed sources, the development of AUVs is expected to be officially decided in July as a project for the Cabinet Office’s Strategic Innovation Promotion Program (SIP).

The government has developed technology to simultaneously operate five AUVs on the ocean floor at a depth of 2,000 meters, and currently is conducting tests in the sea around Okinawa Prefecture. AUVs collect seafloor data using electromagnetic waves and by other means, and the data is transmitted to a repeater device on the surface of the sea via acoustic waves. Then, the repeater transmits the data to an onshore research base using satellite communications.

However, acoustic communications become more difficult the deeper the depth. In addition, since AUVs can operate continuously for up to about 10 hours, it is necessary to frequently charge them on a mother ship.

The government has decided to develop acoustic communication technology that enables offshore communication with vehicles even deeper in the sea. Under the project, a charger for AUVs will be placed at a depth of about 3,000 meters so that AUVs will be able to operate continuously for five days or longer without having to return to the mother ship. In addition, AUVs will be reinforced to withstand water pressure at depths of 6,000 meters.

According to sources close to the government, with the current technological capacity, which is capable of exploring objects at depths up to 2,000 meters, only 30 percent of Japan’s exclusive economic zone (EEZ) can be explored. If it becomes possible to explore objects on the ocean floor at depths up to 6,000 meters, about 94 percent of Japan’s EEZ will be explorable.

The total area combining Japanese territorial waters and the nation’s EEZ is about 12 times larger than the nation’s territorial land area. The deep ocean floor in the EEZ is believed to hold a wealth of rare earth minerals, which are needed to produce high-tech products. According to an estimate by a research team comprising researchers from the University of Tokyo and others, rare earth minerals equivalent to the global demand for several hundreds of years are contained in the ocean floor at depths of over 5,000 meters near Minami-Torishima island, part of the Ogasawara Islands.

The international competition over deep-sea exploration technologies has been intensifying. Norway has already developed an AUV capable of exploring the sea at a depth of 6,000 meters. The Japanese government is speeding up efforts to establish its own technology of this kind to accelerate its ocean floor research activities.