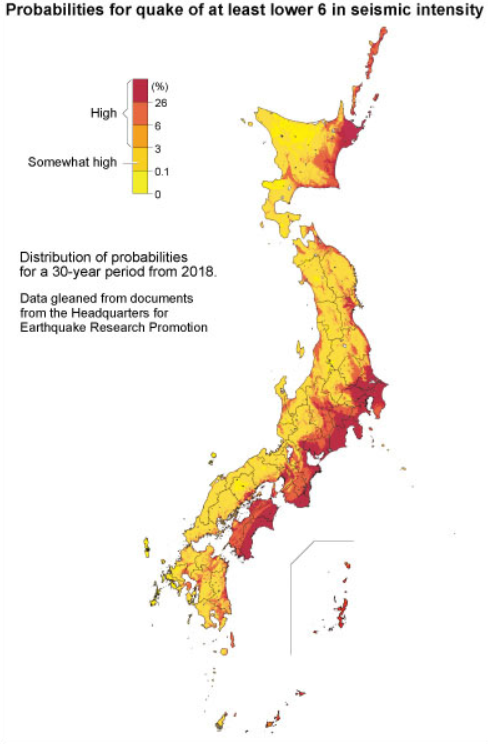 The probabilities for an earthquake of at least a lower 6 in seismic intensity increased for large parts of Hokkaido in the latest National Seismic Hazard Map released on June 26 by the Headquarters for Earthquake Research Promotion.

But experts said residents in regions where probabilities were low should still take precautions as demonstrated by the lower 6 quake on the Japanese seismic intensity scale of 7 that struck northern Osaka Prefecture on June 18.

Takatsuki, Osaka Prefecture, had a probability of 22.7 percent that a quake of that intensity could strike, but it was at the center of much of the recent damage.

“There is no area in Japan that has a zero probability of being hit by at least a lower 6 earthquake,” said Naoshi Hirata, a seismology professor at the University of Tokyo who also serves as chairman of the Earthquake Research Committee of the Headquarters for Earthquake Research Promotion. “I hope preparations for such a disaster are made by families and companies.”

The map is compiled based on the likelihood of an earthquake occurring and the vulnerability to shaking of the ground.

The higher probabilities for the Hokkaido region reflect a re-evaluation of seismic activity along the Chishima trench made late last year that took into consideration the possibility of a massive earthquake with a magnitude exceeding 8.8 hitting the area. Such a quake would be close to the magnitude-9.0 temblor of the 2011 Great East Japan Earthquake.

The re-evaluation pushed up the probabilities of at least a lower 6 earthquake in a large portion of southeastern Hokkaido.

Strong quakes that occur along plate boundaries are believed to occur about once a century. As more than 70 years have passed since a strong quake struck along the Nankai Trough in the 1940s, many areas along the Pacific coast from the Tokai to Shikoku regions as well as the Tokyo metropolitan area continue to have high probabilities for an earthquake of at least a lower 6 in intensity.

Meanwhile, the intervals between strong quakes are longer for temblors that occur along active faults in inland areas and along the coast of the Sea of Japan. For example, Niigata city had a probability of 13 percent while Fukuoka city’s probability was 8.3 percent.

The National Seismic Hazard Maps can be seen in the Japan Seismic Hazard Information Station website (http://www.j-shis.bosai.go.jp/map/?lang=en) of the National Research Institute for Earth Science and Disaster Resilience.