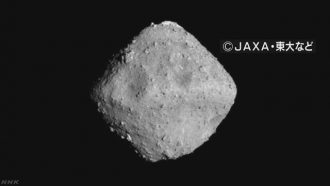 All networks reported that the Japanese probe “Hayabusa 2” reached an asteroid called Ryugu, located about 300 million kilometers from the Earth, at 9:35 a.m. today. The probe was launched four years ago by JAXA. NHK said that the probe will observe the surface of the asteroid from a distance of 20 kilometers until around August, and then land on the asteroid three times to collect rock samples from this autumn to next spring. The network said it is believed that on the asteroid there are water and organic substances dating back to the birth of the solar system 4.6 billion years ago.