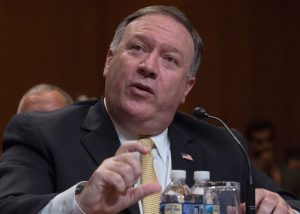 NHK and TV-Asahi highlighted remarks made by Secretary of State Pompeo to Congress on Wednesday, during which he voiced hope that North Korea will take steps toward denuclearization without delay. The Secretary said: “The North Koreans understand the scope of the request that we’re making with respect to denuclearization.” While mentioning the Trump administration’s decision to halt joint exercises with South Korea, the top U.S. diplomat said: “We are following through with the summit commitment. It is our expectation that the North Koreans will begin to do that relatively quickly as well.” The Secretary reportedly suggested that if the ongoing denuclearization talks fail, there will be no way to achieve a peaceful solution to the nuclear standoff. He expressed concern about China’s apparent moves to ease pressure on the Kim regime by saying: “We have observed China not enforcing control over their cross-border areas as vigorously as they were six or 12 months ago.”