Strengths and weaknesses in Abe cabinet: Part 1 – Traditional method for estimating administration’s stability less reliable as fewer pollees say they “don’t know” if they back cabinet 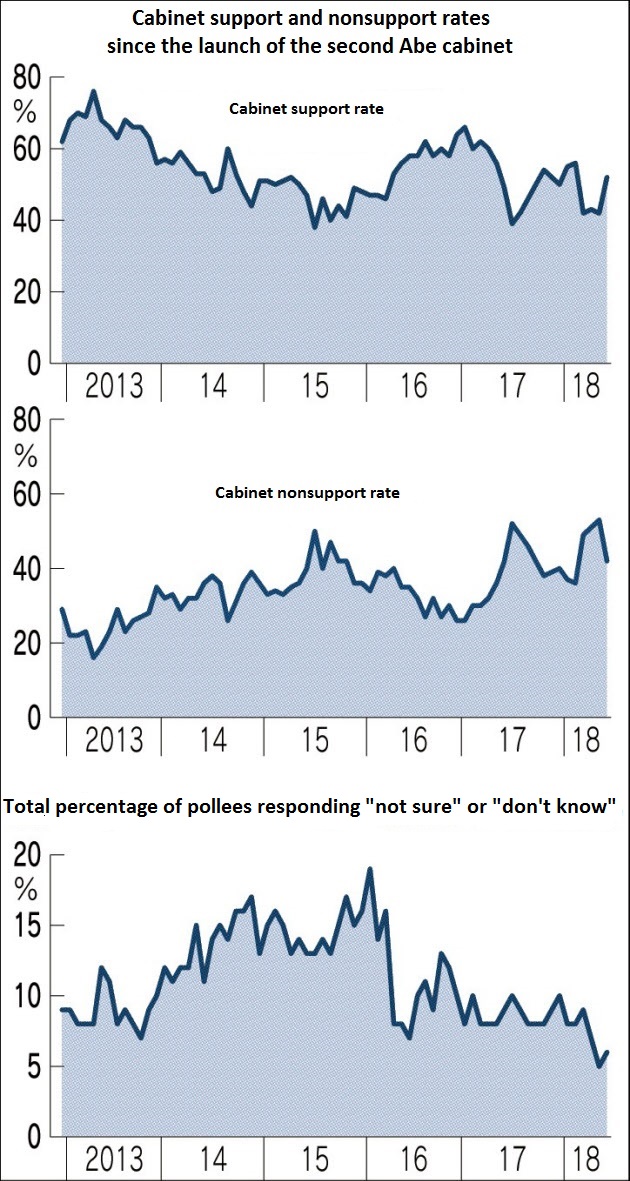 According to the public opinion poll conducted by the Nikkei on June 22–24, the Abe cabinet support rate rose to 52%. Those responding “not sure” or “don’t know” to the question about cabinet support was a low 6%. Even though the cabinet has a support rate of over 50%, the prime minister has a fragile footing because the nonsupport rate is 42%. Although the Leadership Stability Index, what is known in government and bureaucratic circles as the “Aoki Rule,” says that an administration will be under pressure to resign if the ruling party support rate and the cabinet support rate total less than 50, the [foundations for this rule of thumb] are crumbling.

The percentage of pollees saying they “don’t know” if they back the cabinet rose from around 10% when the second Abe cabinet was launched at the end of 2012 to a high of 19% in January 2016, after which point it started to decline. In May and June this year, it was 5% and 6%, respectively.

The sampling method and other aspects of the polling methodology have changed so no direct comparison can be made, but the single-digit figures for “don’t know” over the past two months are among the lowest since the Nikkei started conducting its nationwide telephone-based poll in 1987. In December 1987 soon after the launch of the Takeshita cabinet, some 41% of respondents said “don’t know.” The average rate during the 1989–91 Kaifu administration was 24%, and that during the 1991–93 Miyazawa administration was 22%. In those days, a “don’t know” percentage in the 20% range was not unusual.

In the 2000s, it became more frequent for the percentage of pollees saying “don’t know” to be in the 10% range. The rate averaged 14% during the Koizumi administration, which took office in 2001. During the five and a half years since the second Abe cabinet took office, it has been even lower, averaging 11%. Saitama University Professor Masao Matsumoto, an expert in political awareness, analyzes this as follows: “The information environment has changed with the spread of the Internet, and recently voters have a strong tendency to respond instantaneously to questions. If the number of pollees saying ‘don’t know’ decreases, the support rate indicating administration stability will change.”

The assumption behind the Leadership Stability Index (Aoki Rule), which is the sum of the ruling party (LDP) support rate and the cabinet support rate, is now incorrect. It has no statistical significance. Although it has been used as an intuitive rule of thumb, it may not work today.

In the Nikkei’s June poll, the LDP support rate was 44% and the cabinet support rate was 52%, totaling 96%. According to the Leadership Stability Index, this means that the administration is stable. The cabinet nonsupport rate, however, was 53% in May and 42% in June. A nonsupport rate of around 50% means that if cabinet nonsupporters were to all back the same candidate, that candidate would topple the ruling party candidate in an election where only one person is elected. It is hard to know if the ruling parties will be able to win the Upper House election next summer.

The Leadership Stability Index, also known as the Aoki Rule, is a rule of thumb that says that if the total of the cabinet support rate and the ruling party support rate total less than 50%, the administration will be forced to resign. The principle was proposed by Mikio Aoki, former chairperson of the LDP’s Upper House caucus.