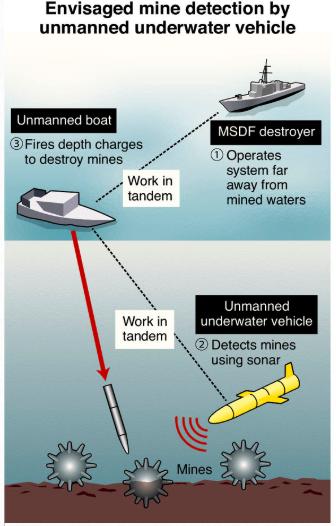 The government plans to purchase the nation’s first domestically developed unmanned underwater vehicle, which will be capable of detecting mines on the seabed, in fiscal 2019, according to government sources.

The government intends to include hundreds of millions of yen for the purchase in its budgetary request for next fiscal year and launch operations in fiscal 2022, the sources said. If a Japanese remote island is occupied and mines are deployed in waters nearby, the envisaged vehicle could be used to remove the mines without putting human lives at risk.

The unmanned underwater vehicle is about 5 meters long and weighs about 1 ton. It will be used together with an unmanned boat operated remotely. First, a Maritime Self-Defense Force destroyer will release the vehicle into the sea and instruct it to automatically navigate in a predetermined area. The underwater vehicle will then detect mines on the seabed using built-in sonar. If mines are detected, information about their location will be sent to the unmanned boat, which will then fire depth charges to destroy the mines.

The unmanned underwater vehicle and boat are slated to be deployed on the MSDF’s next-generation destroyer, which has a standard displacement of about 3,900 tons. The destroyer is scheduled to be launched in March 2022. The Defense Ministry has asked Mitsubishi Heavy Industries, Ltd. to develop a prototype of an unmanned underwater vehicle at the cost of about ¥4 billion.

In the case of a remote island being occupied, the SDF has developed a strategy for retaking it that involves the MSDF first launching an attack on foreign troops occupying the island, before Ground Self-Defense Force members conduct a landing. However, if mines are placed in surrounding waters a destroyer would have difficulty approaching the island. Minesweepers are primarily responsible for removing mines, but the MSDF’s minesweepers have low defense capabilities. If the minesweepers come under attack, SDF members could be killed or injured.

The MSDF has partially introduced foreign-made unmanned underwater vehicles, but they lack the ability to detect mines on the seabed, according to defense ministry sources.

In light of this, a senior ministry official said, “It’s doubtful that equipment currently in use would be enough to regain control of an island.” The introduction of the planned underwater vehicle is meant to correct this deficiency.

The Senkaku Islands in Okinawa Prefecture have seen successive intrusions by Chinese government ships and other vessels. The National Defense Program Guidelines, a basic defense policy devised in 2013, stipulated the need to strengthen the defense of areas in southwestern Japan.

The government intends to push for the introduction of more unmanned underwater vehicles and aircraft. The further use of unmanned equipment is expected to be addressed in new defense program guidelines scheduled to be revised late this year.