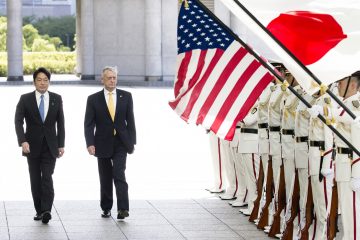 NHK reported this morning that visiting Secretary of Defense Mattis and Defense Minister Onodera met earlier in the day at the MOD in Tokyo, saying that this was the first time for them to meet since the U.S.-DPRK summit was held in Singapore. The network said the two defense chiefs agreed that the suspension of U.S.-ROK joint military exercises is aimed at supporting diplomatic efforts and confirmed that U.S.-Japan and U.S.-Japan-ROK joint military drills will continue since they are important for regional stability.

In addition, the two ministers reportedly agreed that the U.S. and Japan will work closely with the international community to make North Korea abolish all of its weapons of mass destruction and ballistic missiles in a complete, verifiable, and irreversible manner. On the suspension of the U.S.-ROK joint military drills scheduled for August, Secretary Mattis reportedly explained that it is meant to give diplomats a strong negotiating position. The Secretary also reportedly said the current scale of U.S. Forces Korea will be maintained. During the joint press conference, Onodera reportedly said that the U.S. and Japan agree on the importance of USFK and that Secretary Mattis told him that USFK will be firmly maintained in the future. The network showed the Secretary saying at the press conference: “We also recognize the importance of the Japanese abductee issue…. The humanitarian issue is always present in our deliberations.” TBS, Fuji TV, and TV Asahi carried similar stories,