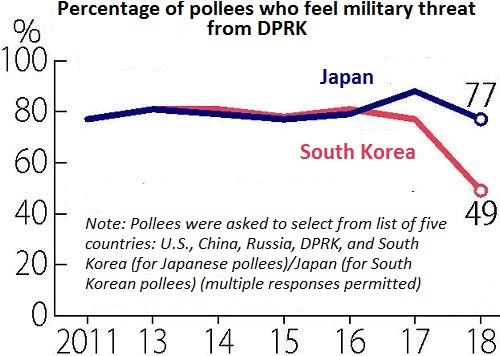 The Yomiuri Shimbun and the Hankook Ilbo conducted a joint public opinion poll in Japan and South Korea to probe views after the first-ever U.S.-DPRK summit held on June 12 between U.S. President Donald Trump and Workers’ Party of Korea Chairman Kim Jong Un. With the U.S.-DPRK summit and the April 27 Inter-Korea Summit, the situation on the Korean Peninsula is changing dramatically. The survey found, however, a difference in perception regarding the DPRK between the two countries. While South Koreans anticipate a thawing of tensions, Japanese are unable to rid themselves of a sense of threat from Pyongyang.

Regarding the relaxation of economic sanctions against the DPRK, 71% of the Japanese and 55% of the South Korean respondents said complete denuclearization must be a precondition for such a move. Some 44% of the South Korean pollees approved of relaxing sanctions in stages based on DPRK initiatives to denuclearize, exceeding the 26% of Japanese who took that same view.

When asked which countries they feel pose a military threat to their country (multiple responses permitted), 77% of the Japanese pollees cited the DPRK (88% in the previous survey conducted in 2017), while 49% of the South Korean respondents picked the DPRK (77%). The substantial decline in the South Korean figure is thought to reflect the decrease in military tensions in light of Pyongyang’s engagement in dialogue with Seoul and Washington.

The percentage of pollees who think that Japan-South Korea relations today are in a good state [including both “generally good” and “very good”] jumped by more than 10 points in each country, with 33% (20%) of Japanese and 26% (15%) of South Koreans giving that response.

The Yomiuri-Hankook Ilbo joint poll was first conducted in 1995, and the 2018 poll is the 14th in the series.

[Polling methodology: The survey was conducted on June 22–24 in Japan and on June 23–24 in South Korea on a computer-aided random digit dialing (RDD) basis with calls placed to landline and mobile phone numbers.

South Korea: The survey was conducted of those aged 19 or over. Valid responses were received from a total of 1,000 people.]