30% of companies say protective trade is blow to their management, Teikoku Databank poll

As the trade friction between the United States and China starts to take on the look of a trade war, some 28.7% of companies think that protective trade will have a negative impact on their company management, according to a Teikoku Databank poll. The poll revealed, though, that many executives are just standing idly by. Some 59.7% of companies said they are “not planning to take action,” while a total of only 4.9% said that they are either “implementing” or “considering implementing” countermeasures.

Asked what kind of impact the protective trade will have on their performance, more than 30% of companies in the manufacturing, wholesale, and transport and warehousing industries said “negative.” In contrast, 13.5% of companies in the agriculture, forestry, and fisheries industries, whose products will be protected under the tariffs, said it will have a “positive” impact.

Some 0.5% of all companies polled said they “are taking countermeasures” while 4.4% said they “are considering” doing so. Asked to describe the measures, the most frequently given response was “beefing up information collection and analysis.” Some companies said that they will review suppliers and sales plans as well as review production plans, including expanding domestic production.

A Teikoku Databank representative commented: “Most companies cannot fully estimate what kind of impact [protective trade] will have on them exactly. More companies will take countermeasures if the trade war heats up.”

The questionnaire survey was conducted on June 18–30 via the Internet. A total of 9,694 companies responded. The results of the poll were released on July 12. 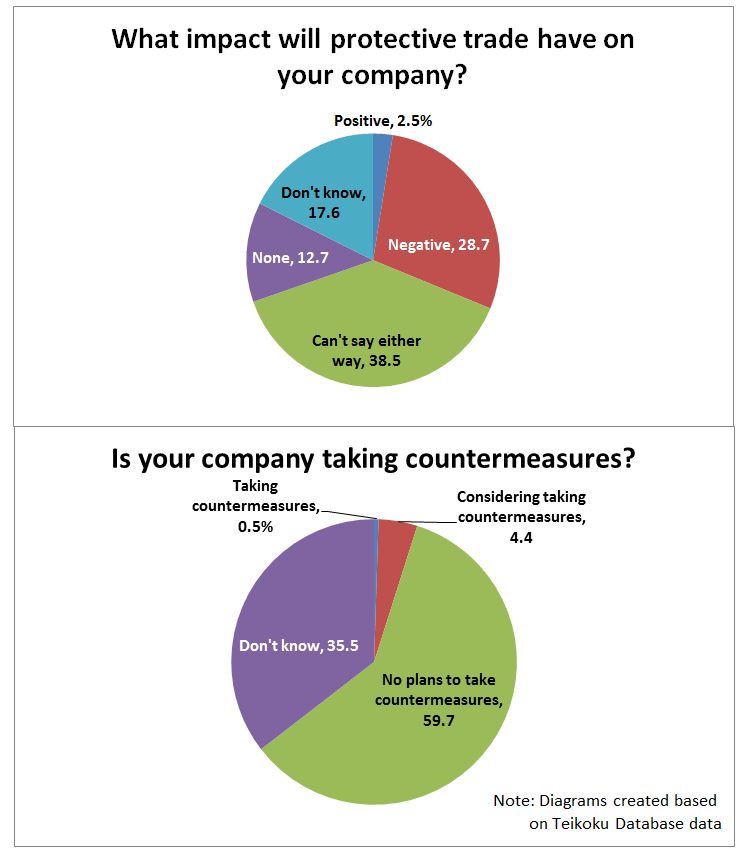