Cabinet support rate tops among those who rely on SNS for news, Asahi poll 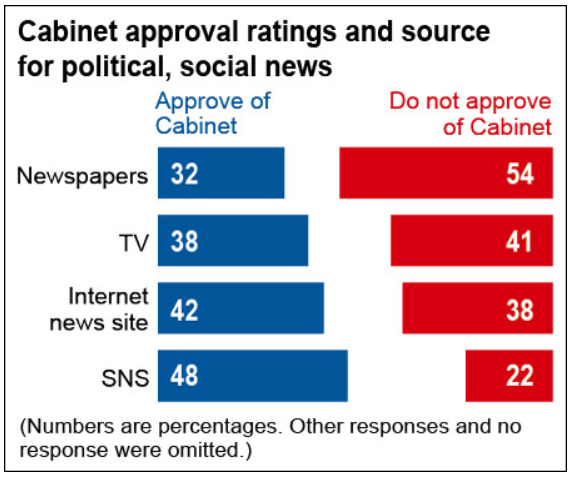 Individuals who get their news from nontraditional online outlets tend to be stronger supporters of the Cabinet of Prime Minister Shinzo Abe than those who rely on newspapers.

Respondents were also asked to pick from one of four options regarding which media outlet was most used in obtaining information about the latest political and social news. Television was the most popular, used by 44 percent of respondents. Twenty-six percent of respondents said they used Internet news sites, while 24 percent said they read newspapers. Four percent said they depended on social networking services, such as Twitter or Facebook.

In June, Finance Minister Taro Aso said that support for the ruling Liberal Democratic Party was highest among people in their teens to 30s and added, “That is the generation that least reads newspapers. People who do not read newspapers are all LDP supporters.”

Aso’s statement was only partly supported by the Asahi poll.

Among respondents between 18 and 29, 38 percent used Internet news sites, while 35 percent depended on TV and 16 percent used SNS sites. Only 8 percent relied on newspapers.

The percentage of those who used Internet and SNS sites continued to decline the higher the age bracket.

However, among those between 18 and 29, 32 percent supported the LDP, almost the same as 34 percent among all respondents. Unaffiliated voters were the largest group at 57 percent.

Among those in their 30s, 37 percent supported the LDP.

Moreover, the LDP support rate did not vary as widely as the Cabinet approval rating depending on the type of media from which voters get their political and social news.

Regardless of the primary source of information, unaffiliated voters made up the largest group.

[Polling methodology: The survey was conducted on July 14–15 on a computer-aided random digit dialing (RDD) basis of voters nationwide with telephone calls placed by pollsters to landline and mobile phone numbers (for landlines, some districts in Fukushima Prefecture were excluded). Valid responses were received from a total of 1,941 persons, including 933 persons (out of 1,913 households found to have one or more eligible voters) for landline numbers and from 1,008 persons (out of the 2,072 persons found to be eligible voters) for mobile numbers. The valid response rates were 49% for landline numbers and 49% for mobile numbers.]