49% of LDP supporters back Abe for next party president, Yomiuri poll 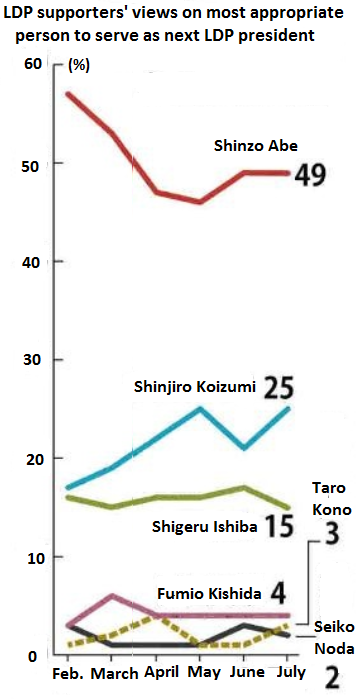 According to the Yomiuri Shimbun’s nationwide public opinion poll [conducted on July 21–22], some 29% of pollees said that Chief Deputy Secretary General Shinjiro Koizumi is most appropriate to serve as the next president of the Liberal Democratic Party (LDP), making this the most frequently given response. Next were Prime Minister Shinzo Abe at 26%, former LDP Secretary-General Shigeru Ishiba at 22%, Minister for Internal Affairs and Communications Seiko Noda at 4% and LDP Policy Research Council Chairman Fumio Kishida and Foreign Minister Taro Kono at 3% each. Among LDP supporters, however, Prime Minister Abe was the most frequently given response at 49%. He had a marked lead over the next most frequently given responses of Shinjiro Koizumi (25%) and Shigeru Ishiba (15%). Kishida, Kono, and Noda trailed at 4%, 3%, and 2%, respectively.

Since February of this year, the Yomiuri poll has asked who would be most appropriate as the next LDP president and consistently offered pollees the same six individuals to choose from.

Since February, Abe has been the most frequently given response among LDP supporters. In the February poll, however, he was backed by 57% of his party supporters. Backing for him has been on a continuous  decline since then, reaching a low of 46% in the May poll. His backing in the July poll is 49%, the same as in the June poll.

Some 61% of LDP supporters in the July poll said that they are “not convinced” by Prime Minister Abe’s explanations regarding the Moritomo Gakuen and Kake Educational Institution scandals. It is thought that this harsh view of Abe impacted the responses to the question about the next LDP president.

Those LDP supporters who have become alienated from Abe are turning mainly to Koizumi.

Backing for Koizumi among LDP supporters has risen 8 percentage points since the February poll when 17% backed him. In contrast, support for Ishiba, who has expressed the intent to run for the presidency, has been flat.

[Polling methodology: The nationwide survey was conducted on July 21–22 on a computer-aided random digit dialing (RDD) basis and targeted voters aged 18 or over with calls placed to landline and mobile phone numbers (excluding landline numbers in certain areas of the three prefectures that suffered damage from the torrential rains in western Japan, namely, Okayama, Hiroshima, and Ehime). Valid responses were received from a total of 1,034 persons, including 503 persons (out of the 892 households with one or more eligible voters) for landline numbers and 531 persons (out of the 1,191 persons who answered) for mobile numbers. The valid response rates were 56% for landline numbers and 45% for mobile numbers. Starting from this July poll, the poll is jointly conducted by the Yomiuri Shimbun and Nippon News Network (NNN).]