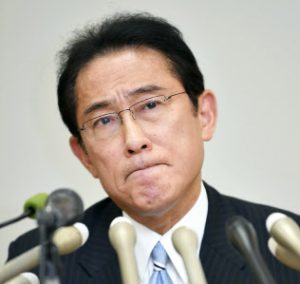 All papers reported extensively on LDP Policy Research Council Chairman Kishida’s announcement to the press yesterday that he has decided not to run in the LDP presidential election slated for September and instead will support Prime Minister Abe’s bid to seek a third term. He said: “I’ve decided against running in the belief that it is more appropriate for me to assist the prime minister in dealing with various political challenges,” such as the recent flooding in western Japan, including his home constituency of Hiroshima, and the Emperor’s abdication next year. The veteran politician phoned Abe earlier in the day to convey his decision, which the premier reportedly appreciated greatly.

As former LDP Secretary General Ishiba is prepared to file his candidacy for the presidency, the September race is likely to be a showdown between him and PM Abe. Although Ishiba is popular among rank-and-file party members, especially in the countryside, most papers projected that Abe will probably prevail since support for his candidacy appears to be overwhelming among LDP Diet members. The articles speculated that Kishida chose not to challenge Abe this time in the hope that after Abe’s purported third term as LDP leader expires in 2021, he and his followers will embrace Kishida’s bid to take the helm of the ruling party.