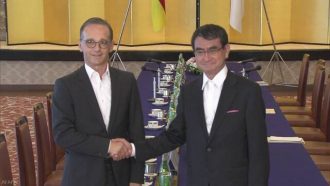 NHK reported online that Foreign Minister Kono met with his German counterpart Maas, saying that the two ministers confirmed close cooperation toward the early effectuation of the EPA between Japan and the EU that was signed last week. According to the network, Kono and Maas agreed on the importance of maintaining a rules-based international order including free trade. The network added that the two ministers also agreed to urge all nations to implement the UNSC resolutions in order to realize the complete, verifiable, and irreversible denuclearization of North Korea. Kono reportedly said at a joint press conference: “It is becoming more important than ever for Japan and Germany to work together closely given that the free and open international order based on rules is facing serious challenges.” Maas reportedly stressed: “We will clearly convey an anti-protectionist message through the EPA and other initiatives.”