Those in teens and 20s think highly of Abe administration, Sankei-FNN poll 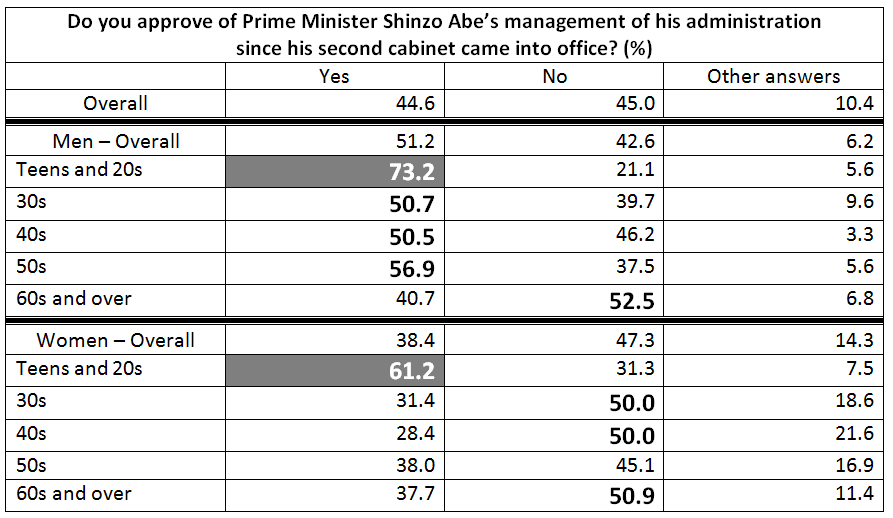 According to the opinion poll jointly conducted by the Sankei Shimbun and Fuji News Network (FNN) [on July 21–22], some 73.2% of men in their teens and 20s and 61.2% of women in the same age group think highly of Prime Minister Shinzo Abe’s management of his administration. This is thought to be the result of the recovery of the economy and the improvement in the job situation thanks to Abenomics. The employment rate among university graduates is at an all-time high. In contrast, those in their 60s or over take a harsh view of the Abe administration. The result is a clear divide among the generations.

At a press conference on July 23, Chief Cabinet Secretary Yoshihide Suga avoided commenting directly on the high support rate among young people. “We will produce results by skillfully handling key issues, such as economic revitalization, diplomacy, and security,” he said. (Abridged)

[Polling methodology: The survey was conducted until the calculated number of responses was obtained by placing telephone calls on a random digit dialing (RDD) basis adjusted to the gender and age composition of each survey area. A total of 1,000 men and women, aged 18 and over, across the nation were surveyed. The survey was conducted on July 21–22, 2018.]