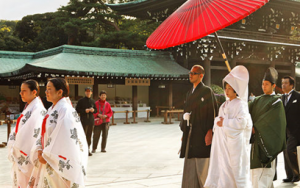 With the Heisei Era to end with the Emperor Akihito’s abdication on April 30, 2019, Yomiuri (6/19) looked into the shifts in young people’s attitudes toward love and marriage over the past three decades by examining romance-related buzzwords. When the Heisei period began in 1989, the entire nation was swept up in the economic bubble, and love and money appeared closely intertwined. The words mitsugu-kun, ashii-kun, and messhii-kun were used to ridicule young men who were willing to give women expensive gifts, drive them around, and treat them to extravagant meals in a bid to win their affection. Broadcasters aired torendi dorama, dramas depicting romances among well-off hip city dwellers. Many youths longed to experience the big city life portrayed in these shows. Sanko, or “three highs,” was a slang term used at the time to describe the conditions that many Japanese women sought in their future husbands – high income, high educational background, and tall stature. The phrase narita rikon, meaning “divorce at Narita Airport,” emerged in 1990 to describe couples who decided to divorce as soon as they returned from their honeymoon after discovering that they were not a good match.

The following year saw explosive sales of a book entitled Kekkon Shinaikamoshirenai Shokogun or “The ‘I Might Not Get Married’ Syndrome,” in which novelist Shiho Tanimura portrayed young women who were content to stay single unless they ran into a Mr. Right with the “three highs” because the women were well educated, had their own careers, and could support themselves financially. The book apparently foretold a tendency among Japanese women to forego marriage. The proportion of Japanese women who had not married by the age of 50 rose from 4.8% in 1989 to 14.1% in 2015, while the corresponding figures for men were 5.2% and 23.4%. Six years later, renowned sociologist Masahiro Yamada coined the term parasaito singuru, young salaried workers who lead comfortable lives by living off their parents. An increase in the number of young people who chose not to marry out of fear that their living conditions would worsen if they moved away from their parents was viewed as a primary factor behind the decline in marriage.

In 2004, a collection of essays entitled Makeinu no Toboe (right), or “The Howl of the Loser Dogs,” became a bestseller. In the book, author Junko Sakai referred to women in their 30s who are not married and have no children as “loser dogs.” It caused a sensation, with many young female readers vowing not to become “losers.” Four years later, the term konkatsu, or “marriage hunting,” came into wide use to describe the strenuous efforts young people needed to make to find suitable lifelong partners, such as attending match-making parties, going on sightseeing tours, and using dating websites. As the nation was engulfed in the global economic slump triggered by the collapse of Lehman Brothers in the same year, many youths had difficulty landing jobs after college. Women seeking partners who offered financial security had a hard time finding them because more young men were stuck in temporary or part-time jobs. The aforementioned phrase parasaito singuru took on a more negative connotation – low-income youths who live with and depend on their parents well into adulthood. 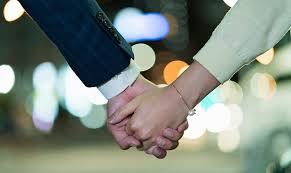 Since many young Japanese became “economically weak,” some of them chose to steer clear of romance. Such terms as soshoku danshi (herbivore boys), and zeshhoku danshi, (fasting boys), began to appear frequently in the media in 2009 to describe young men who lacked masculinity and avoided any sort of relationship with the opposite sex. These men were reportedly indifferent to economic affluence and had no interest in cars or clothes. They were also dubbed the “satori sedai,” or “enlightened generation,” because of their resemblance to zen monks, marking a sharp contrast with the materialism that characterized their counterparts in the late 80s and early 90s.

More recently, a TV comedy series called “We Married as a Job!” captured the hearts and minds of young Japanese in 2016. The story, in which a man who is not interested in romance and a woman who is out of work enter a “contract marriage,” apparently struck a chord with viewers. The program shed light on the issue of sharing marital and housekeeping responsibilities between spouses as the wife was annoyed by the husband’s proposal to stop paying her a wage for doing domestic chores that she had performed for a fee as his live-in housekeeper before they got married. She rejected the idea, arguing that suspending the payment would be tantamount to “exploiting love.”

In analyzing the popular buzzwords used over the past 30 years, Yomiuri concluded that for Japanese youths money and matrimony seem inseparable, lamenting that “romantic love” may no longer be an essential component of marriage.