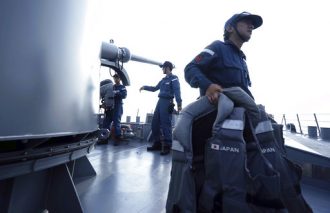 TBS and TV Asahi reported at noon that the GOJ hosted a multinational joint exercise with the U.S., South Korea, Australia, and other nations to inspect containers at Yokosuka Port in Kanagawa this morning as part of efforts to intercept weapons of mass destruction at sea. According to TV Asahi, the joint exercises were held based on the scenario of customs officials and police officers inspecting containers on foreign ships carrying substances to produce sarin gas. The network said about 50 members of the SDF, Japan Coast Guard, National Police Agency, and Japan Customs participated in the training from the Japanese side.