Abe continues to be favored by LDP supporters for next party president, Sankei-FNN poll 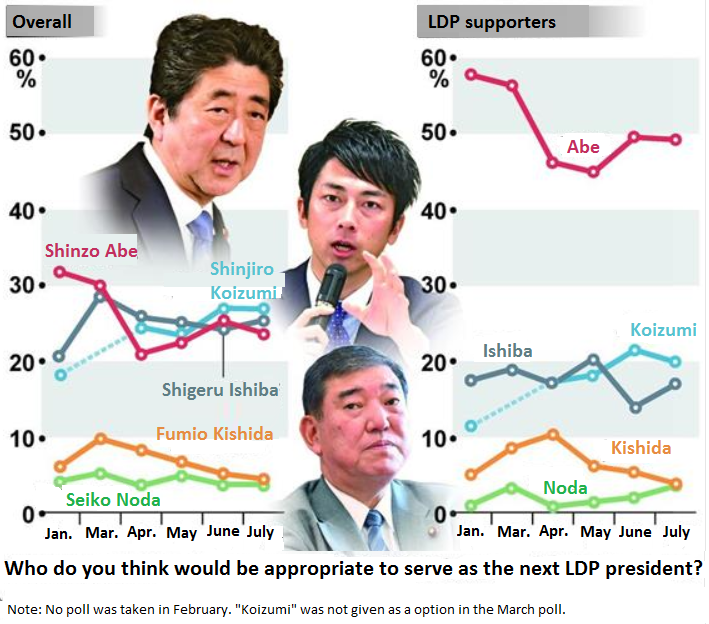 Asked who would be appropriate to serve as the next Liberal Democratic Party (LDP) president, some 25.3% of all respondents said former LDP Secretary-General Shigeru Ishiba, according to the opinion poll jointly conducted by the Sankei Shimbun and Fuji News Network (FNN) on July 21–22. Ishiba outdistanced Prime Minister Shinzo Abe, who was ranked second in the June poll and gained the backing of 23.6% of all respondents in the July poll. Among LDP supporters, however, Abe enjoyed three times the backing of Ishiba. The Prime Minister remains in the dominant position with about two months remaining until the party presidential election.

Among LDP supporters, Abe held onto the top position with a backing of 49.1%, essentially unchanged from the 49.4% found in the June poll. Ishiba saw his support rise 3.0 percentage points among LDP backers from June to reach 16.9%. He was still below LDP Chief Deputy Secretary General Shinjiro Koizumi, whose backing slipped to 19.8%, down 1.6 points from the previous survey.

Some 72.1% of LDP supporters approve of the Abe administration’s foreign policy, and it seems that approval of the Prime Minister’s diplomatic skill, including his adept handling of the rapidly changing situation on the Korean Peninsula, is undergirding his solid support rate.

In contrast, Ishiba continues to have difficulty attracting rank-and-file party members’ votes, which he hopes to use as his trump card to turn the tables on other contenders for the presidency. Ishiba was ahead of the Prime Minister in support across all generations except men in their teens, 20s, and 50s and women in their teens and 20s. His backing among LDP supporters is on the rise, but there has not been a dramatic change that would make it hard to tell who will win more party member votes.

Since April, the Prime Minister has visited Hokkaido as well as Osaka, Shiga, and Saitama Prefectures among others and attended the meetings of prefectural LDP branches federations and meetings of LDP local assembly members. In each of these areas, Abe won fewer or the same number of party member votes as Ishiba in the 2012 LDP presidential election, which Abe won.

Ishiba is fighting an uphill battle to expand his support among Diet members outside of his faction (Suigetsukai, 20 members) and so is focusing particularly on winning party member votes. He is assiduously campaigning for votes: He held a reception in Osaka Prefecture in February that attracted 1,200 participants. He has also made appearances at prefectural assembly meetings across the nation.

Ishiba’s basic strategy is to impact Diet members’ voting by winning the vote among rank-and-file party members by a landslide. This is what former Prime Minister Junichiro Koizumi did in the 2001 presidential election where he took the situation by storm and dispelled the rumor that he was in the one-down position. With the election only about two months away, it is a blow to Ishiba that the all-important backing of LDP supporters is not increasing.

Support for LDP Policy Research Council Chairman Fumio Kishida, who has yet to declare whether he will run in the election, was 4.4%, down 0.7 points from the June poll. His backing is even more sluggish among LDP supporters at 3.8%. He faces the issue of name recognition. Support for Minister for Internal Affairs and Communications Seiko Noda, who has officially announced her candidacy, was flat at 3.7% among all voters and 3.5% among LDP supporters.

[Polling methodology: The survey was conducted until the calculated number of responses was obtained by placing telephone calls on a random digit dialing (RDD) basis adjusted to the gender and age composition of each survey area. A total of 1,000 men and women, aged 18 and over, across the nation were surveyed. The survey was conducted on July 21–22, 2018.]