Does Abe really have a solid position going into the LDP presidential race?

It is the votes cast by rank-and-file Liberal Democratic Party (LDP) members that hold the key to the LDP presidential election in September. Because party member votes will have more weight starting from the upcoming election, both Prime Minister Shinzo Abe and former LDP Secretary-General Shigeru Ishiba are traveling across the nation to round up support. We looked at the data from the Asahi Shimbun’s public opinion polls to determine which way the wind is blowing for the party member vote. 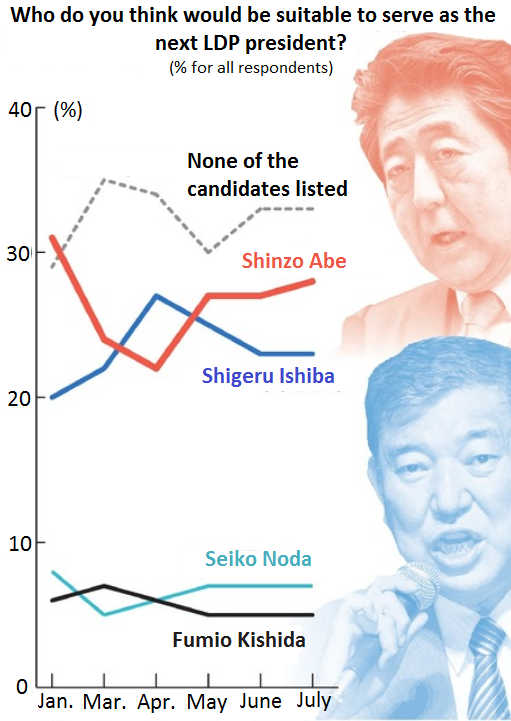 The Asahi Shimbun’s nationwide (telephone) survey conducted on July 14–15 asked respondents who they think would be suitable to serve as the next LDP president and gave them the following four options: Prime Minister Shinzo Abe, Shigeru Ishiba, LDP Policy Research Council Chairman Fumio Kishida, and Minister for Internal Affairs and Communications Seiko Noda. The Prime Minister had the backing of 54% of LDP supporters, securing for him the top ranking. Abe is a distance above the second-place Ishiba, who was backed by 19% of LDP supporters. It must be remembered, however, that the support trend among rank-and-file party members, who will cast a ballot in the election for party president, does not necessarily match that among LDP supporters.

Although Ishiba outpaced Abe in the 2012 presidential race in the local vote, Abe emerged victorious from the election because in the runoff he won the Diet member vote. In an Asahi public opinion poll conducted at that time, some 27% of LDP supporters said they backed Ishiba and 18% said Abe. Over the past six years, Abe has reversed the situation.

An analysis of the polling results, however, shows that there are some causes for concern and that Abe’s backing cannot be called solid.

One cause for concern is Abe’s low popularity among independents. The LDP president is the face of the party in a national election. Whether a presidential candidate will be a party leader who makes it more likely that party members will be elected impacts the party member vote. The question of whether a candidate can broadly win over independents as well as LDP supporters is important. 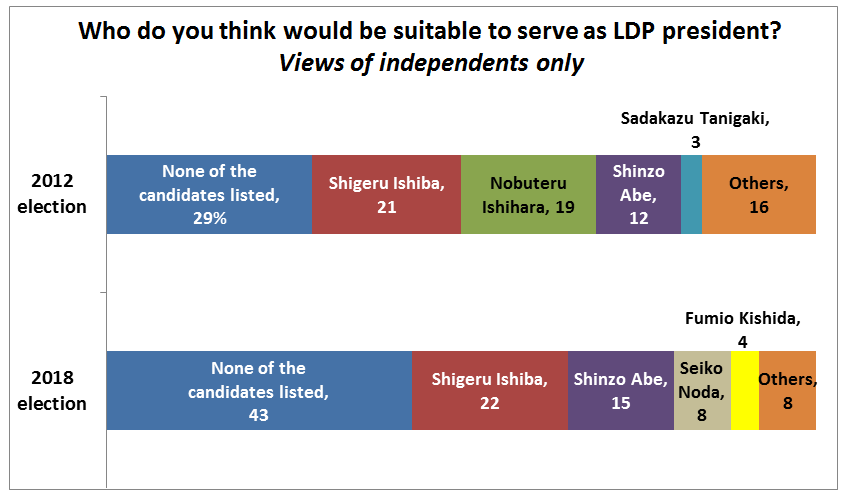 In the recent poll, independents made up 47% of all respondents. Some 43% of them said that “none of the candidates listed” would be appropriate as the next LDP president, making this the most frequently given response. Next was Ishiba at 22% while Abe had the support of only 15% of independents.

In a similar poll conducted prior to the 2012 LDP presidential election, 29% of independents said “none of the candidates listed,” followed by Ishiba (21%), and Abe (12%). Just as in the poll conducted six years ago, Abe trails Ishiba among independents.

Shinjiro Koizumi can also be regarded as a potential threat to the Prime Minister. It is thought that a certain number of those who selected “none of the candidates listed” in the recent poll back Koizumi. Koizumi comes out on a par with Prime Minister Abe across the board in other media outlets’ polls on who should be the next LDP president. If Ishiba were able to form a highly-sought-after partnership with Koizumi, there is a chance that support for Ishiba would increase dramatically.