UK appeals to Japan to press EU for Brexit deal 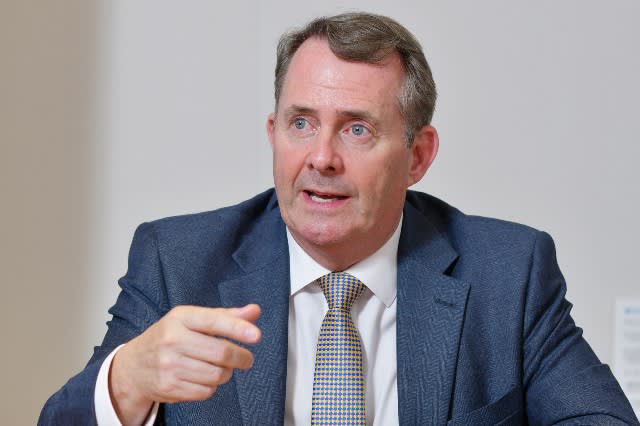 A senior U.K. official urged Japan and other trading partners to press the European Union to reach an accord on Britain’s departure from the economic bloc, to avoid further disruption to the world economy.

“We need our allies around the world also to talk to the EU and say, ‘Britain has made you a fair and reasonable offer’,” said Liam Fox, secretary of state for international trade, in an interview with the Nikkei Asian Review. “If you reject that offer, and we end up with no deal, that would be to everybody’s detriment — the EU, the U.K. and our trading partners.”

Fox was referring to a British proposal earlier this month about the new relationship with the EU after the March 2019 Brexit.

The proposal centers around forming a free trade area for goods, giving more autonomy to British services trade, and resolving disputes in a joint manner between the U.K. and the EU.

Britain needs to thrash out a deal with the EU by October to avoid a situation where the country is left out of the single European market, without the preferential access it has enjoyed as a member of the EU.

Japanese automakers are anxiously watching the negotiations. For a long time, Britain has served as their export base for continental Europe.

Nearly 1.7 million cars are produced in the U.K. annually, of which 80% are shipped overseas — more than half to Europe.

Once the U.K. exits the single market, manufacturers in the country could face tariffs, as well as extra administrative work to document where their products are mainly produced.

Japanese companies have another reason to look outside the U.K. Earlier this month, Tokyo signed a free trade agreement with the EU, creating an option of exporting directly from Japan, rather than manufacturing in the U.K.

A choice of location will come into greater focus as automakers evaluate the location of production for emerging technologies such as electric vehicles.

During his two-day stay, Fox visited Japanese companies and the Japan Business Federation, to reassure them about a smooth post-Brexit transition.

The U.K. has put forward a reasonable offer, and “it’s now for the EU to determine whether they think that’s acceptable,” Fox said.

He stressed that no deal would mean that EU companies would have to pay 14 billion pounds in tariffs to get into the British market, while adding that most of Britain’s exports are to markets outside the EU. “I don’t think it makes any sense for the EU to effectively push for no deal.”

According to a press release from the U.K. Department for International Trade, Motegi welcomed Britain’s TPP bid and said that Japan would “spare no effort” in its support for Britain.

Tokyo sees the U.K. move as helping it create momentum for free trade following the U.S. withdrawal from the TPP under President Donald Trump. The TPP encompasses many former British Commonwealth countries, such as Canada, New Zealand, Australia and Singapore, and is now prepared to welcome other countries such as Thailand, Colombia and South Korea.

But for most Japanese companies, the more immediate concern is Brexit, rather than the U.K.’s possible participation in the TPP in the future, said Junichi Sugawara, analyst at Mizuho Research Institute.