Chairman of Council of Economic Advisers expects U.S. economy to continue to grow 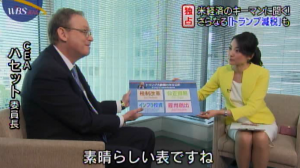 TV Tokyo’s popular nightly business news program “World Business Satellite” led with a six-minute report on its exclusive interview with Council of Economic Advisers Chairman Kevin Hassett that was held in Tokyo on Wednesday. The program introduced Chairman Hassett as someone who plays a key role in advising President Trump on macroeconomics. When asked about the possibility of the U.S. economy continuing to grow, Hassett said the current forecast is for the economy to grow an average of 3% a year over the next five years, adding that this is a big increase from the economy President Trump inherited from the previous administration. He also said that tax reform has been the biggest contributor to economic growth, expressing the view that President Trump’s major tax cuts have resulted in job growth and U.S. companies’ returning to America. Hassett expressed the view that the President is mulling additional tax cuts, saying: “President Trump is a man of action…. Frankly he just doesn’t talk about tax cuts 2.0 – also 3.0, 4.0. 5.0.” Concerning the new U.S.-Japan trade talks set to be launched next week in Washington, Hassett said he is optimistic about the outcome. Nikkei Senior Writer Takita, who interviewed Hassett, commented that the CEA chairman apparently attaches importance to tax cuts for their effect of revitalizing business and boosting household spending.