Japan, Australia vow to try to avoid conflict over whaling 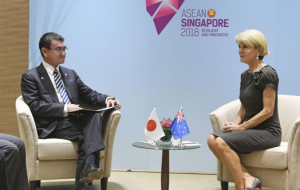 Japan and Australia agreed Friday to make efforts to prevent a dispute over whaling from hurting bilateral relations, a government official said.

During talks in Singapore, Japanese Foreign Minister Taro Kono briefed his Australian counterpart Julie Bishop about his country’s proposal to restructure the International Whaling Commission to make it easier to resume commercial whaling.

But Australia has been strongly opposed to all forms of whaling, raising concern that ties between Tokyo and Sydney could be strained by the practice which Japan contends is a cultural tradition.

Japan halted commercial whaling, in line with the global moratorium adopted by the IWC in 1982, but has hunted the mammals since 1987 for what it calls “scientific research purposes.”

The Australian government, however, has remained opposed to Japan’s claims of “scientific” whaling.