The LDP’s leadership vote is weeks away, but the race could already be over 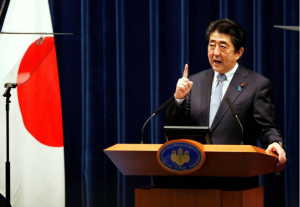 This year’s biggest political event in Japan is undoubtedly the ruling Liberal Democratic Party presidential election, set for September, which will determine the fate of Prime Minister Shinzo Abe.

But the political drama may already be over, even before the curtain has been raised.

At present few within the LDP’s ranks question Abe’s victory, as most major intraparty factions have shown their support for him in the race, slated to take place on Sept. 20. According to a survey by Kyodo News conducted until July 29, at least 310 of the LDP’s 405 lawmakers responded that they will vote for Abe in the party presidential election, making Abe’s victory almost certain — and allowing him to also retain his post as prime minister.

But even the Takeshita faction is deeply split between two major candidates — Abe and former defense minister Shigeru Ishiba.

Of them, 21 Upper House members have decided to back Ishiba, who himself heads a small faction of 20 members, according to two Upper House executives in the faction who spoke to The Japan Times this week.

But when Takeshita met with 21 of the group’s 34 Lower House members Thursday to see whom they want to vote for, the vast majority of them expressed support for Abe, according to a source close to the faction.

Takeshita and his faction executives are now set to meet Wednesday to decide which candidate the faction will support in the election. But Upper House members supporting Ishiba and pro-Abe Lower House members of the Takeshita faction appear to be set for a clash.

Separately, on Thursday, another senior Upper House member of Takeshita’s faction said he believes the score in the Abe-Ishiba race is now something like 9 to 1 in favor of Abe.

The 21 Upper House members are supporting Ishiba in a bid to raise the odds and thereby rouse policy debates within the party, not necessarily to win the race, the lawmaker suggested.”Otherwise the presidential election would be meaningless” with no influential contender standing against Abe, the senior lawmaker said, speaking on condition of anonymity.

Abe, who began his second stint in power in December 2012, has won several national elections largely thanks to his Abenomics economic policies, which are centered on ultraloose monetary policy and aggressive fiscal spending. Many economists have questioned the sustainability of radical monetary-easing by the Bank of Japan, which has now been buying massive amounts of government bonds and stocks from the market for more than five years.

But so far the economy has seen no critical, adverse side effects from the BOJ’s unprecedented easing program, although significant risks for future generations are believed to have accumulated due to an ever-increasing government debt. The perceived success of Abenomics has helped Abe maintain his popularity among voters and his political clout within the party, political analysts say.

But in recent months the approval rate — a critically important measure for Abe’s arguably populist government — eventually bounced back, helped by unpopular opposition parties that have only criticized Abe over the favoritism scandals and failed to propose any alternative economic and welfare policies.

Ishiba, who has also served as minister in charge of regional revitalization, has put a lot of faith in ballots from rank-and-file party members because he was far more popular than Abe in non-urban areas in the last LDP presidential election, which was held in 2012. But media polls have indicated Abe is more popular than Ishiba among LDP rank-and-file members, too.

According to the latest poll, conducted by the daily Asahi Shimbun on July 14 and 15, 54 percent of LDP supporters said Abe is the most suitable person to be the next prime minister, while only 19 percent cited Ishiba.

“Prime Minister Abe traded places (with Ishiba) over the past six years,” Asahi concluded in analyzing the result of the latest poll.

But is Abe likely to secure another full three-year term as a formidable LDP president and prime minister? Some in the Takeshita faction don’t believe so.

A senior Upper House member of the faction said he feels many voters have found themselves frustrated with Abe’s government, saying they are already “tired of” him as he has retained power for almost six years.

Some 62 percent of the LDP supporters said they believe Abe’s government has continued in power for more than five years “because there is no other person or party you can expect much from.”

BOJ Gov. Haruhiko Kuroda, handpicked by Abe, has pledged to reinvigorate the economy by sparking annual inflation of 2 percent.

But the BOJ has yet to achieve the much-touted goal even after more than five years. Now many economists question the sustainability of Kuroda’s monetary-easing.

The first major test for Abe’s new government, expected to be formed soon after the LDP election, is likely to be the Upper House election slated for July next year.

“We say ‘In politics, it’s all darkness one step ahead,’ ” said the Upper House lawmaker, citing an old Japanese saying.