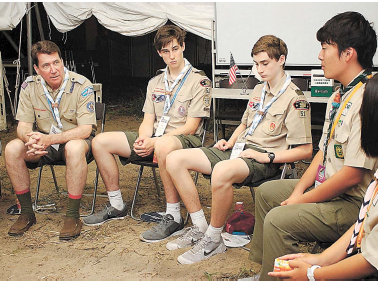 About 13,000 boy scouts from throughout the nation gathered on Aug. 4 for the Nippon Scout Jamboree, which opened in Suzu City that day. They pitched tents of various colors on a 103 hectare site and began their outdoor experience amid Noto’s attractive Satoyama and Satoumi. U.S. Ambassador to Japan William Hagerty visited the camp on the first day of the Jamboree and encouraged the scouts from Hiroshima, Okayama, and Ehime Prefectures, which were devastated by the torrential rains in western Japan. He also gave an exclusive interview to the Hokkoku Shimbun.

Ambassador Hagerty praised Suzu: “It’s beautiful with the sea right there. I am delighted that young people from throughout Japan are gathering in this place.” Driving along the Sea of Japan coast on the way to the venue, however, he said, “I thought of the abduction of Megumi Yokota, and my heart ached,” stressing the U.S. position to continue to call for the resolution of the abductions issue.

Ambassador Hagerty joined the Boy Scouts at age 8 and is an “Eagle Scout,” the highest Scout rank in the United States. It was his first time to participate in a Jamboree in Japan, and he brought with him his two sons, ages 13 and 15. They pitched a tent at the same campsite as the group from Hiroshima Prefecture and spent the night there.

After supper, he talked with the groups from Hiroshima, Okayama, and Ehime Prefectures, which were hit by the torrential rains. He listened to their descriptions of the current state of the areas devastated and their experiences volunteering in recovery efforts.

During the interview with Hokkoku Shimbun, Ambassador Hagerty, who traveled by car from Tokyo, said that his chauffeur told him as they were traveling along the Sea of Japan coast that “Megumi Yokota was abducted from another prefecture on the Sea of Japan.”

His two sons are about the same age as Megumi when she was abducted. Ambassador Hagerty said he thought of the stories of Megumi’s mother and “keenly felt the sadness of a parent.” “During meetings with North Korea, the United States will continue to call for that nation ‘to return the Japanese abductees to Japan,’” he emphasized.

Hagerty spoke of a Scout experience he had while camping near the border between the United States and Canada when he was 14. One night a bear appeared, and the Scouts took turns standing watch through the night, keeping a fire lit and ensuring the safety of the group and their provisions. “I grew a bit that night,” he reflected, expressing his hope that the young people gathered in Suzu would also grow.

Ambassador Hagerty took up his post last August and visited Kanazawa in February this year. This was his first trip to Noto, and he said that he liked the scenic beauty with its intermingling of sea and fields. “My family also says they like Ishikawa very much. We may have to buy a second home here!” he said half-jokingly.