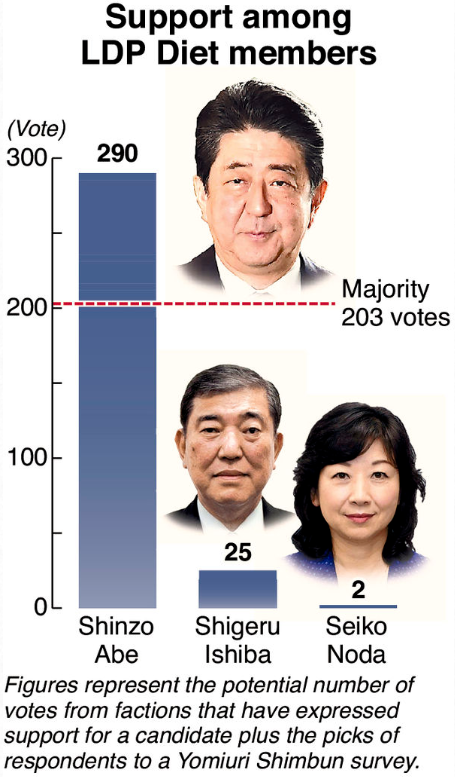 Prime Minister Shinzo Abe, who is seeking his third consecutive term as president of the Liberal Democratic Party, will likely earn more than 70 percent of the 405 votes to be cast by the party’s Diet members in the upcoming September poll, The Yomiuri Shimbun has learned.

Abe has won the support of four LDP factions, including the largest bloc led by Hiroyuki Hosoda, and has the backing of 17 lawmakers from two other groups led by Wataru Takeshita and Nobuteru Ishihara, though neither group has endorsed a candidate. The prime minister also has the support of 28 members not affiliated with a faction. As a result, Abe will likely receive at least 290 votes, according to a survey conducted by The Yomiuri Shimbun.

The survey was conducted after July 24, when LDP Policy Research Council Chairman Fumio Kishida announced his decision to not run in the presidential poll and instead back Abe. LDP Diet members were asked which of the three candidates they planned to support.

The Yomiuri Shimbun received replies from 104 of 140 members who belong to either the Takeshita or Ishihara factions or are not affiliated with any bloc.

A total of 810 votes will be cast in the LDP presidential poll, with half cast by Diet lawmakers and half by rank-and-file party members.

Of the party’s seven factions, the Hosoda bloc and three others led by Taro Aso, Kishida and Toshihiro Nikai have already announced their support for Abe. The Hosoda faction boasts the largest following with 94 members, while 59 belong to the Aso group. The Kishida faction has 48 members and the Nikai faction has 44 members.

According to the survey, nine members from the Takeshita faction, which has 55 members, will also back Abe, as will eight from the 12-member Ishihara faction and 28 of 73 unaffiliated lawmakers.

Combined, Abe has the support of 290 lawmakers, or 72 percent of the LDP’s Diet caucus.

Forty-two unaffiliated lawmakers said they are undecided about who to support or did not submit a response. Abe could earn more than 300 votes should he win additional support from factionless members, and appears to hold the high ground among ballots to be cast by Diet members.

Three lawmakers from the Takeshita faction and two unaffiliated members said they will vote for Ishiba, suggesting he has the backing of 25 members, including the 20 from his own faction.

The Takeshita faction is drawing attention over its next move. Among the group’s members, 34 said they are undecided who they will vote for, while eight did not respond to the survey.

However, almost all 21 House of Councillors members in the faction are expected to get behind Ishiba. The former LDP secretary general could pad his support by making inroads with Takeshita bloc members and unaffiliated lawmakers.

The survey found only two lawmakers back Noda, including Noda herself. As a candidate requires the support of 20 lawmakers to run in the presidential election, the race will likely be a head-to-head contest between Abe and Ishiba.

In such a scenario, Ishiba would need the support of 70 percent of rank-and-file party members to win should Abe maintain his 70 percent support rate among Diet lawmakers. Ishiba’s ability to expand his support base will be crucial to the race’s outcome.