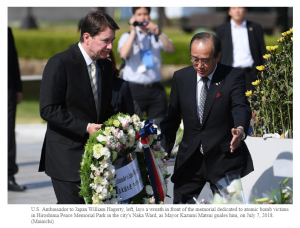 HIROSHIMA — U.S. Ambassador to Japan William Hagerty on July 7 told Hiroshima Mayor Kazumi Matsui that he intends to ask U.S. President Donald Trump to visit Hiroshima and see the damage caused by the U.S. atomic bombing of the city 73 years ago, according to city officials.

Following their meeting here, Ambassador Hagerty and his family laid a wreath at the memorial for the victims of the “Little Boy” uranium bomb that detonated over the western Japanese city on Aug. 6, 1945.

The ambassador attended the Aug. 6 ceremony in Hiroshima to commemorate the 73th anniversary of the bombing. U.S. representatives have attended the event every year since 2010, but it is rare for a U.S. ambassador to exchange views with the city’s mayor.

Matsui told the press after his meeting with Hagerty that he briefed the ambassador about this year’s peace declaration, which Matsui read out at the ceremony the previous day and that pressed world leaders to abolish nuclear weapons based on reason. Hagerty replied that everyone wants a world without nuclear weapons, but in reality, issues such as nuclear programs in North Korea and Iran must be dealt with, according to Matsui. The mayor emphasized the importance of the nuclear weapons ban treaty, but the ambassador apparently made no reference to the international accord.