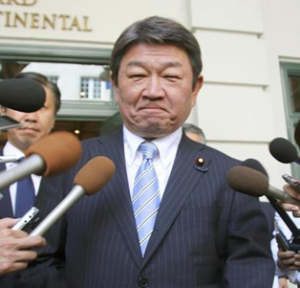 All Sunday papers reported on the first round of “FFR” (free, fair, and reciprocal) trade talks, asserting that they ended in Washington on Friday without producing any concrete achievements. According to the papers, Economic and Fiscal Policy Minister Motegi and USTR Lighthizer agreed to expand bilateral trade, but did not reach a consensus on specific issues such as potential U.S. auto tariffs and U.S. access to Japan’s agricultural market. They decided to hold their next round of talks in September. Motegi told the press afterward: “I think both sides agreed on the basic direction of finding ways to promote trade between the U.S. and Japan…. As the talks have just begun, we didn’t make decisions on individual issues. We will be deciding how to address outstanding issues while pursuing measures to promote trade between the U.S. and Japan.” With regard to the possibility of the U.S. imposing auto tariffs, the Japanese minister said: “I told Mr. Lighthizer that building confidence is indispensable. We agreed to continue discussions based on a relationship of mutual trust.”

Motegi reportedly turned down a request from Lighthizer to hold bilateral trade negotiations by reiterating Japan’s hope for the U.S. to return to the TPP. According to the papers, the Japanese minister called on the Trump administration not to impose additional tariffs on Japanese cars, but Lighthizer did not make a definite reply to the Japanese request. The two officials reportedly agreed to enhance mutual coordination in dealing with trade issues involving China, such as intellectual property violations and state-owned enterprises. They also agreed to promote WTO reforms.

Yomiuri claimed that Lighthizer was not as confrontational as Japanese officials had expected and reportedly did not mention the term FTA during the talks. The daily attributed his conciliatory approach to his preoccupation with more pressing issues, such as renegotiation of NAFTA and trade talks with China and the EU. Nikkei opined that as Lighthizer’s current policy priority is renegotiating NAFTA, he may have decided not to put too much pressure on Japan this time. Both papers projected, however, that Lighthizer might step up the pressure in the September session, as President Trump might urge him to produce quick deliverables ahead of the midterm elections in November.

Mainichi claimed that Japan may eventually be pushed into tight corner, projecting that Washington is bound to ratchet up the pressure on the agricultural front since the Trump administration needs to mollify U.S. farmers who are reportedly worried about losing access to the Chinese market due to the escalation of tit-for-tat tariffs and concerned about their products being at a disadvantage in Japan on account of the TPP and the Japan-EU EPA. Sankei opined that Japan has no effective tools to head off U.S. trade pressure, noting that even if Japan puts forward such ideas as increasing Japanese corporate investment in the U.S. and imports of American LNG and defense equipment, the Trump administration might still not ease the pressure on Tokyo.

Asahi, Nikkei, and Mainichi claimed that Japan appears optimistic that the U.S. will not impose additional auto tariffs on Japanese vehicles at least for the time being, speculating that Motegi’s use of the phrase “mutual trust” in the post-meeting press availability indicates the U.S. probably will not invoke higher auto tariffs as long as bilateral consultations are underway. Noting that prior to the talks some Japanese officials had been worried that the U.S. side might threaten to level additional auto tariffs if Japan rejected a U.S. call for an FTA, Nikkei quoted a GOJ source as saying that “progress was made” on the matter. Sankei and Yomiuri claimed that Motegi was not able to obtain an assurance from Lighthizer that Japanese autos would be exempted from potential tariffs. Yomiuri conjectured that GOJ officials are still concerned that Washington will eventually use auto tariffs as a tool to press Japan to open its farm market or conclude a bilateral FTA in the event that the FFR talks become prolonged.