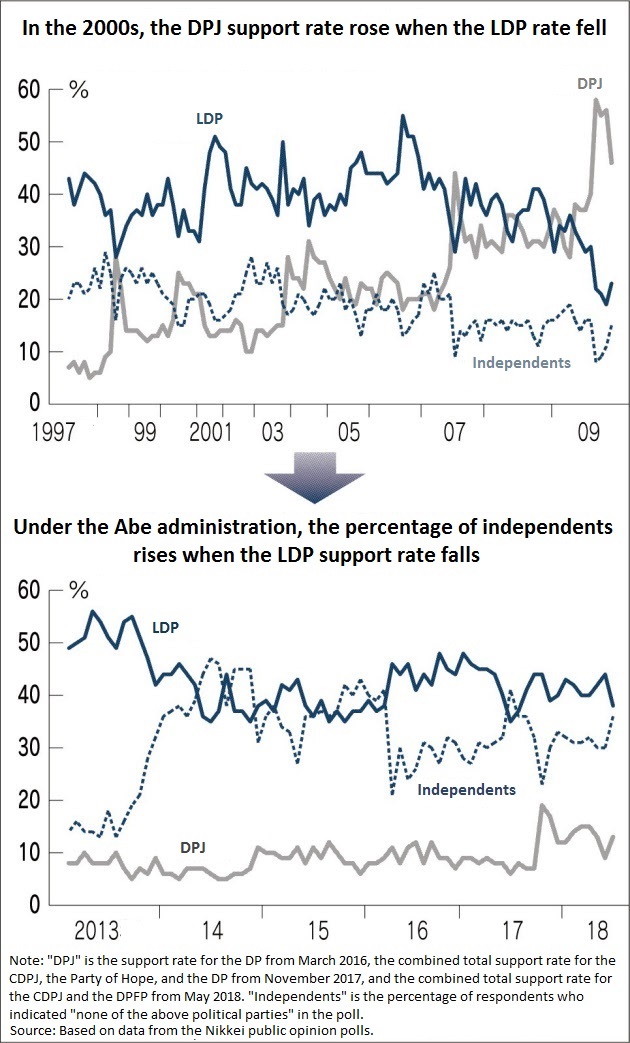 By Hiroyuki Akiyama and Junnosuke Kohara

Support for opposition parties is at historically low levels

Kenichiro Seki of the DPFP says voters complain to him that “there is a mental sluggishness at the Diet now because the opposition parties are too weak.” Nonsupport for the Abe cabinet was as high as around 50% due to the scandals related to school corporations Moritomo Gakuen and Kake Educational Institution. Despite that, however, the support rates for the opposition parties have not risen.

In the 2000s, the DPJ support rate would rise when LDP backing declined. The two rates moved together. Even in the days of Prime Minister Junichiro Koizumi, whose administration lasted from 2001–06, the support rate for the DPJ averaged around 20%. The highest rate for the DPJ during that period was the 31% recorded in September 2004, which was within striking distance of the LDP’s 34%.

The situation has been different since the Abe cabinet took office in December 2012. The Abe administration has also enjoyed a long period in office, but only twice has the main opposition party’s support rate risen in the eight times that the LDP support rate has dropped over 5 points. In seven of these eight times, the percentage of independents increased. “The LDP and independents” move in tandem rather than “the LDP and opposition parties.” An LDP member who has served as LDP Election Strategy Committee chairperson says, “With the political party support rates, we pay attention to the movements of the ‘independents’ not those of the opposition party support rates.”

DPFP co-leader Yuichiro Tamaki says about his party’s 1% support rate: “There is nothing we can do about the rate because the party has not been in an election yet.” The party is depending on an election to boost its support rate.

The 2019 Upper House race will be the first full-fledged national election since the formation of the new opposition party framework with the demise of the DPJ and DP. The turnout rates for the last three Lower House elections were the lowest in the postwar period. The question is whether the opposition parties will be able to prevent voters opposed to the Abe administration from becoming independents and instead attract them to support the opposition parties.