40% support plan to relocate Futenma to Henoko while 44% oppose it, Kyodo News poll 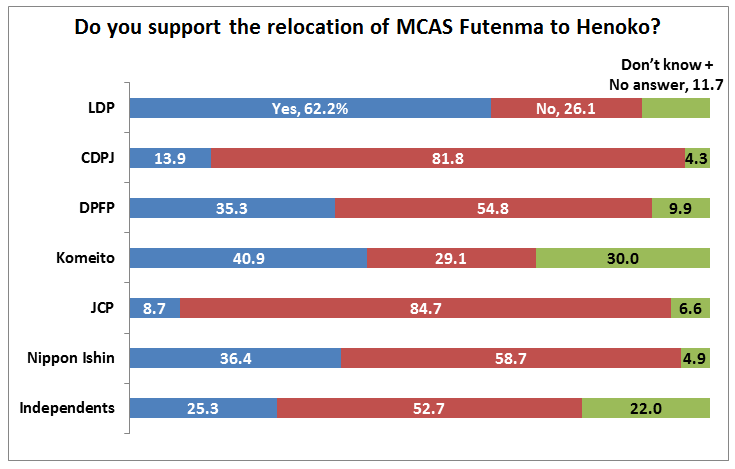 The Kyodo News [nationwide telephone-based] opinion poll conducted on Aug. 25–26 asked pollees for their views on the relocation of U.S. Marine Corps Air Station Futenma (Ginowan City, Okinawa Prefecture) to the Henoko district of Nago City. Some 62.2% of Liberal Democratic Party (LDP) supporters said they back the plan while only 40.9% of Komeito supporters approve of it. This reveals that there is a difference in views between the ruling parties’ supporters. The question of the relocation will be a focal issue in the Okinawa gubernatorial election (on Sept. 30). Both parties are endorsing former Ginowan Mayor Atsushi Sakima for governor, but there is a chance the difference in supporters’ views will impact electoral collaboration between the two parties.

[Polling methodology: The survey was conducted by telephone on a computer-aided random digit dialing (RDD) basis on Aug. 25–26 targeting voters across the nation. However, the survey excluded landline numbers in some areas in Fukushima Prefecture. The survey covered 743 randomly selected households with eligible voters nationwide [by landline numbers], with responses collected from 514 people. A total of 1,151 people were accessed through their mobile phones, of which 513 responded.]