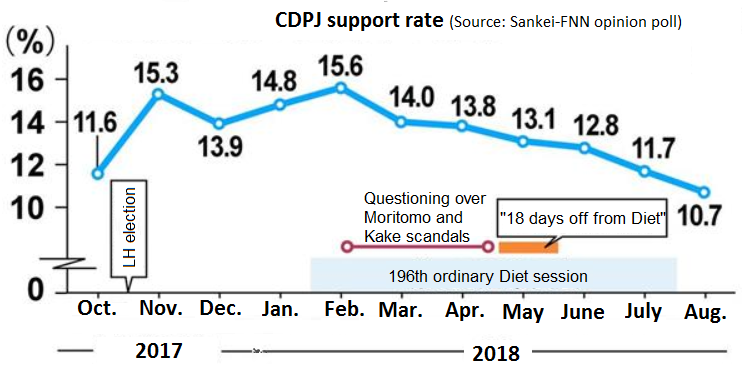 A shadow has fallen over the Constitutional Democratic Party of Japan (CDPJ). The support rate is on the decline, and the party has not found the key to turn around the situation. The CDPJ won many votes against the Liberal Democratic Party (LDP) in last year’s Lower House election, but it looks like its increasingly militant strategy at the Diet has resulted in alienating supporters.

On the evening of Aug. 30, the CDPJ held an assembly of its semi-members known as “partners” at Korakuen Hall in Tokyo. “Strike the gong of grass-roots democracy!” declared the flyers they distributed. As “Influenza,” a song by the idol rock group Nogizaka 46, filled the venue, party leader Yukio Edano entered the ring and said to the 1,200 people gathered: “We will walk side by side together, striving to create a society where all people can have a tangible sense that their lives are getting better!”

Contrary to the euphoric atmosphere at the assembly, the party has faced difficulties since its formation. According to the opinion poll jointly conducted by the Sankei Shimbun and Fuji News Network (FNN) on Aug. 25–26, CDPJ support has plummeted to its lowest-ever rate of 10.7%. The cabinet nonsupport rate is not low (44.4%), so the low backing shows that the CDPJ is not adequately attracting voters who are dissatisfied with the cabinet.

The CDPJ support rate peaked in February at 15.6% when the recent ordinary Diet session was getting underway. At the Diet, though, the CDPJ adopted the policy of staging an all-out resistance over the scandals surrounding [school operators] Moritomo Gakuen and Kake Educational Institution. This is because the party thought “there is no way an opposition party that snuggles up to the ruling parties will gain the people’s support,” according to a high-ranking CDPJ official.

The decision to boycott Diet deliberations around the Golden Week holidays in April and May was criticized as “18 straight days off.” Simultaneously, the support rate slowly but steadily declined. In its insistence on being unique, the CDPJ faces the dilemma of no longer being viewed as an opposition party which broadly takes in cabinet nonsupporters.

The CDPJ, which has prided itself on having a high support rate, charged off on its own path, distancing itself from other parties which are seeking to “re-create the former Democratic Party.” If the CDPJ’s support rate continues to decline, though, it is unclear whether it will be able to stick to its “proud independence.”