The Japan Atomic Energy Agency began removing fuel as a step toward the decommissioning of the Monju fast breeder reactor in Tsuruga, Fukui Prefecture, on Thursday morning.

The work was initially planned to start in July, but was postponed due to problems with equipment. It will be the first decommissioning of a fast breeder reactor in Japan, and the process is expected to take 30 years, continuing until fiscal 2047.

At the Monju reactor, there are fuel rods in the reactor vessel and also in an adjacent external vessel storage tank, both of which are filled with liquid sodium. On Thursday, the JAEA worked to transfer one of the fuel rods from the storage tank to a fuel pool that is filled with water. 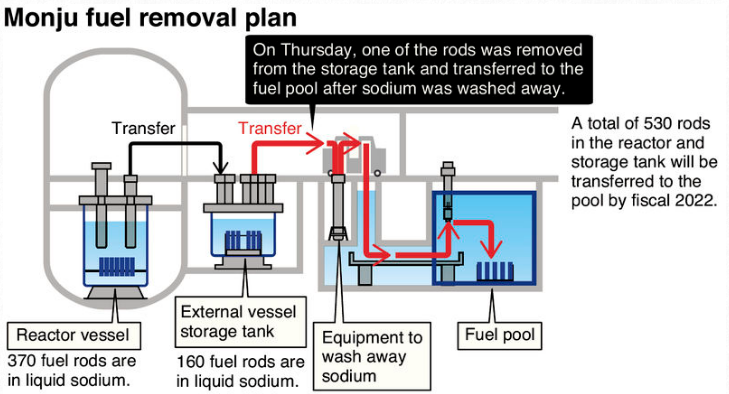 Each such rod is 4.2 meters tall and 11 centimeters wide. A total of 530 fuel rods — 370 in the reactor and 160 in the storage tank — are to be transferred to the pool by the end of fiscal 2022. A method for ultimate disposal of the removed rods has yet to be decided.

The reactor and the storage tank are filled with liquid sodium because Monju uses it as a coolant to extract heat from the reactor. As sodium reacts violently when exposed to water and air, the work needs to proceed carefully, and the JAEA plans to remove the rods at a pace of one per day for the time being, it said.

Monju, which reached criticality for the first time in 1994, was hit by a series of problems, including a sodium leak in 1995, and the decommissioning of the reactor was decided in 2016. The reactor was in operation for only 250 days.

As the JAEA has extracted only two fuel rods so far, there is some concern over its lack of experience. At the stage of preparing for the removal work, sodium became attached to the equipment, delaying the start of the work for a month due to equipment malfunctions and an inability to see images from monitoring cameras.

The cost of decommissioning the reactor is estimated at about ¥375 billion, but this figure does not include other costs such as for measures to deal with earthquakes. The total cost could increase further.

Nuclear Regulation Authority Chairman Toyoshi Fuketa said at a press conference Wednesday, “We want [the JAEA] to proceed with the work with a sense of tension, with top priority placed on safety rather than giving importance to the schedule.”