The government is working to develop technology that will fully utilize artificial intelligence to detect suspicious vessels, according to sources.

Aimed at strengthening maritime surveillance capabilities in waters around Japan, the envisioned technology is projected to be used for such purposes as monitoring North Korean ship-to-ship cargo transfers in international waters, the sources said.

The government aims to start testing the AI-based technology in fiscal 2021 using vessels of the Self-Defense Forces.

The system will analyze information automatically transmitted by radio from the Automatic Identification System (AIS, see below) onboard many ships. 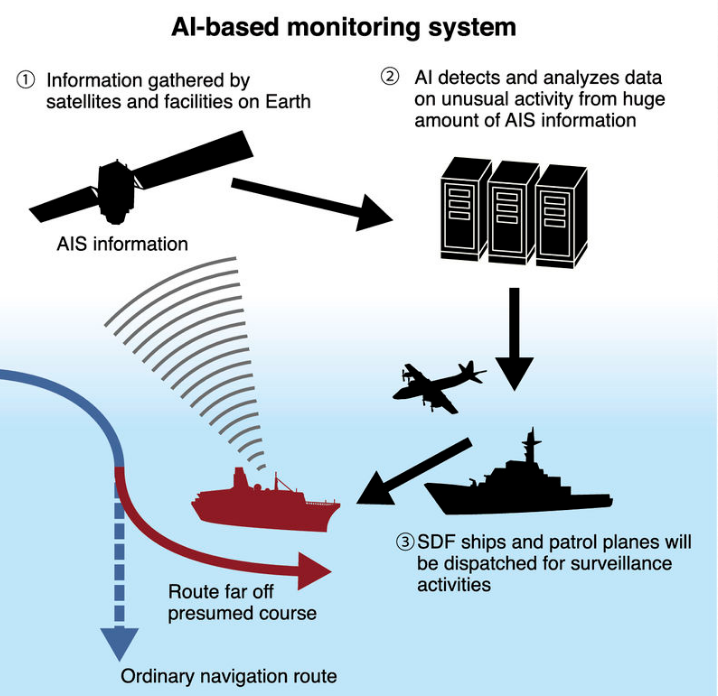 The AI will learn an enormous amount of information on the location and speed of ships, making it possible to automatically detect abnormalities such as ships navigating far away from ordinary routes or in the opposite direction.

The SDF will identify suspicious ships by comparing the AI-collected data with information gathered by warning radar, and will dispatch destroyers and patrol aircraft for warning and surveillance activities.

Information on suspicious vessels will be shared with the Japan Coast Guard and other relevant organizations to enable a rapid response.

In the future, the government will improve its ability to detect and identify suspicious ships that temporarily shut off AIS by also analyzing such information as images of ships’ wakes captured by satellites.

The government has begun developing the system because foreign and suspicious ships have been increasingly active in waters around Japan.

In addition, a South Korean research vessel is suspected to have conducted research without Japanese approval in Japanese territorial waters around Takeshima islands, Shimane Prefecture, in January and February this year.

The AI-based system is expected to supplement the monitoring activities of vessels and aircraft of the SDF and JCG, thus making it possible to efficiently monitor a wide expanse of ocean.

The government’s third Basic Plan on Ocean Policy, formulated in May this year, calls for enhancing “maritime domain awareness” capabilities, including monitoring.

The government plans to bolster maritime surveillance capabilities further by introducing cutting-edge technologies, including an upgraded radar system installed on a satellite.

A radio system capable of monitoring the position of the ship on which it is installed and those navigating in surrounding waters. Used to prevent collisions and control ship traffic. The International Convention for the Safety of Life at Sea requires all passenger ships and ships of 300 or more gross tons be equipped with AIS.