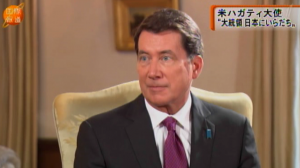 NHK BS’s regular weekday international news program “Kokusai Hodo 2018” aired a two-minute report on its interview with Ambassador Hagerty, introducing him as one of President Trump’s closest confidants. The anchor said the Ambassador expressed the view that President Trump is frustrated with the lack of progress in U.S.-Japan talks on reducing the United States’ trade deficit with Japan.

The narrator said Ambassador Hagerty gave an interview to NHK on Tuesday on the occasion of the first anniversary of his arrival at his current post. On the U.S.-Japan trade issue, the program showed the Ambassador saying: “The negotiations have actually been underway for sometime. We’ve been talking about our economic relationship since April of last year. Is the President frustrated with the trade deficit? Yes. Is he frustrated that we don’t have an agreement with Japan at this point? Yes, that’s true. I think the President has a measured view because he has a deep respect for Prime Minister Abe. They’ve formed a close friendship. I feel confident that we are going to be able to move forward.” The narrator said the Ambassador expressed hope for in-depth discussions during the second round of talks between USTR Lighthizer and Economic Revitalization Minister Motegi slated for later this month.

With regard to the sudden cancellation of Secretary Pompeo’s trip to Pyongyang last week, the program showed the Ambassador saying that the President “felt that we weren’t at a proper point to meet, that the North Korean side was not bringing to the table what the President felt necessary to have a successful meeting. He’s not going to meet for the sake of meeting.” The narrator said the Ambassador stressed the need to continue to apply pressure on North Korea.