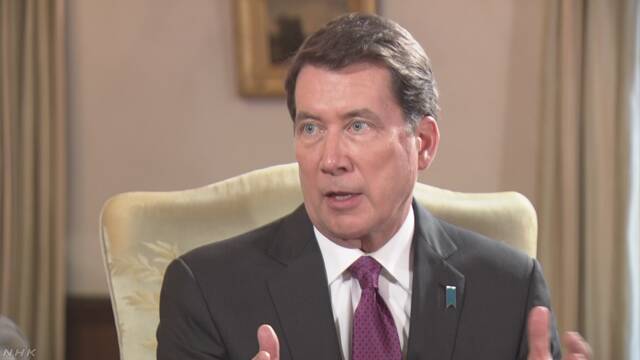 In an interview with NHK on Sept. 4, U.S. Ambassador to Japan William Hagerty expressed the view that President Donald Trump is frustrated with the lack of progress in U.S.-Japan talks on reducing the U.S. trade deficit with Japan. The Ambassador also expressed his hope that the discussions at the second round of trade talks scheduled for later this month will be more in-depth.

On the occasion of the first anniversary of his assumption of office as U.S. ambassador to Japan, Mr. Hagerty gave an interview to NHK at his residence in Tokyo on Sept. 4.

During the interview, Ambassador Hagerty spoke about the trade issues between Japan and the U.S. “President Trump is frustrated with the trade deficit with Japan, and he is also frustrated that we don’t have an agreement,” he said.

“President Trump has deep respect for Prime Minister Abe. They formed a close friendship. I feel confident that we will see progress,” he also said. Ambassador Hagerty expressed his hope for in-depth discussions during the second round of trade talks between U.S. Trade Representative Robert Lighthizer and Minister in charge of Economic Revitalization Toshimitsu Motegi slated for later this month. “The United States and Japan have many points of common ground. The second round of negotiations will be more concrete.”

Regarding President Trump’s sudden cancellation of Secretary of State Mike Pompeo’s visit to North Korea last week, Ambassador Hagerty explained that the U.S. deemed that North Korea is not ready to take concrete action toward denuclearization. “North Korea was not bringing to the table what the President was hoping for. We are not going to meet for the sake of meeting,” said Ambassador Hagerty. He stressed once again the need to continue to apply pressure on North Korea.