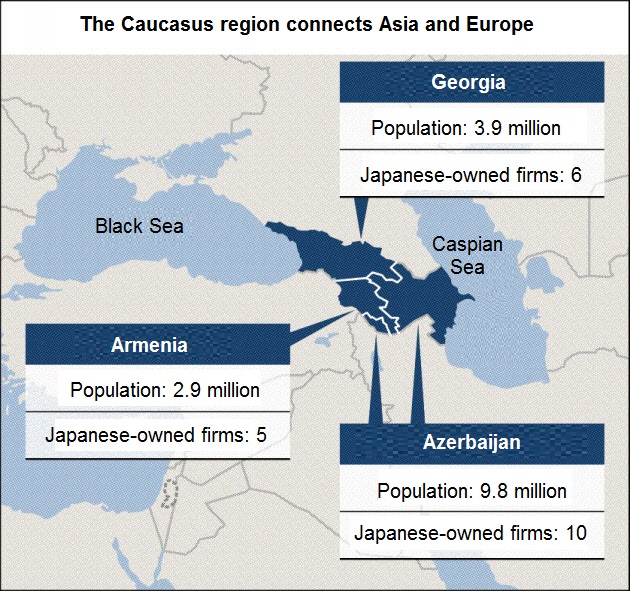 On Sept. 6, Foreign Minister Taro Kono completed his tour of the three Caucasus nations of Armenia, Georgia, and Azerbaijan. He agreed Japan would promote infrastructure development and private-sector investment in the region. He also confirmed that Japan would provide cooperation for the stable supply of energy resources. Russia has influence in the Caucasus region, and China is also entering the area. With these two nations in mind, Kono demonstrated Japan’s desire to also be actively involved in the region.

During his three-country tour, Foreign Minister Kono announced the “Caucasus Initiative,” a plan for Japan to develop human resources and improve the business environment [in the region]. In Armenia and Georgia, Kono and his counterpart discussed expanding investment in such areas as information technology (IT).

Kono met with Azerbaijan President Ilham Aliyev on Sept. 5 and communicated Japan’s desire “to continue to cooperate in energy development projects.” INPEX Corporation and Itochu Corporation both hold interests in that nation’s abundant oil and gas fields. Azerbaijan exports energy resources to Europe via pipelines, and the stability of the region impacts energy supply and demand throughout the world.

In his meeting with his Georgian counterpart on Sept. 4, FM Kono emphasized that Georgia is “a valuable partner with which Japan shares the core values of freedom and democracy.” The statement was directed at Russia and China. Russia continues to have influence in the region even after the various nations’ independence, while China is entering the area through the Belt and Road Initiative, which aims to create a new economic bloc. Japan plans to support the nations in pursuing independent development where they do not rely on China or Russia.