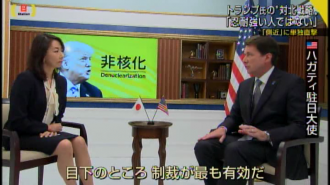 TV Asahi’s weekly news program “Sunday Station” aired on Sunday its one-on-one interview with Ambassador Hagerty held at Embassy Tokyo’s studio on Friday. When asked whether he has ever talked to President Trump about North Korea, the Ambassador reportedly said he certainly has and that the President sees denuclearization as a way to offer the people of North Korea an opportunity to achieve further economic development. He said that as that message reaches the people of North Korea, they will hope for change. The Ambassador also said that North Korea should move forward with denuclearization, adding that while the dismantling of one of the nuclear facilities was encouraging, there is still a lot more to be done. He stressed the need for North Korea to present an extremely solid framework for denuclearization. When asked whether the U.S. will apply military pressure on North Korea again if progress is not made in the negotiations, the Ambassador reportedly said the President has never said he was removing the option of military pressure, adding that the President thinks that sanctions are the most effective measure for the time being.