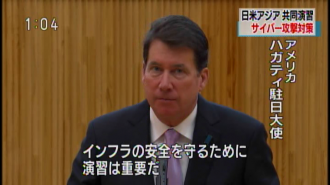 NHK reported at 1 p.m. on joint cybersecurity training hosted by METI and the U.S. Department of Homeland Security that began at a university in Tokyo today, saying that it was attended by about 130 government officials from South Korea, India, and ASEAN nations. The network showed Ambassador Hagerty saying in a speech there: “The threat of cybersecurity could not be higher….What you’re doing today plays a critical role in ensuring that the infrastructure remains safe and secure.”

The network said that according to METI, the number of cyberattacks against companies is growing around the world, adding that there has been an increase in attacks targeting subsidiaries and clients with insufficient security measures in Asia. The network said the governments of the U.S. and Japan are hoping that Asian nations will strengthen their cyber-defenses and counter China which is apparently building up its cyberattack capabilities. The network added that the training will continue until Friday Sept. 14.