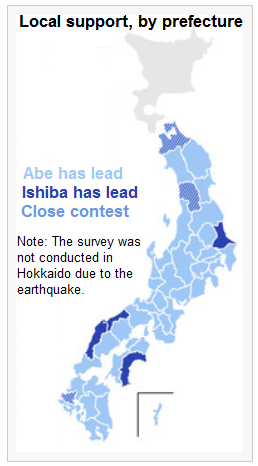 The Kyodo News telephone-based poll conducted on Sept. 7–8 surveyed voting preferences among Liberal Democratic Party (LDP) members and fraternity members in the presidential election (to be held on Sept. 20). Some 61.0% said they will vote for Prime Minister Shinzo Abe (LDP president), while 28.6% said they will back former LDP Secretary-General Shigeru Ishiba. Converting those percentages to presidential election votes, it looks like Abe will win more than 270, or about two-thirds, of the 450 rank-and-file votes from party members and fraternity members. Abe is also set to garner 340 of the 450 LDP Diet member votes. There is a strong possibility that Abe will win a third consecutive term.

Former Secretary-General Shigeru Ishiba is expected to win around 130 rank-and-file party member votes and 50 Diet member votes. Ishiba will seek to recover in the debates from Sept. 10. The start of campaigning activities was postponed to Sept. 10, following a decision by the LDP to refrain from holding any election-related event through Sept. 9 in light of the earthquake in Hokkaido. A total of 10.4% of pollees said that they either “are undecided” or “don’t know” or they gave no answer to the question about voting preference. This means there is a chance that voting trends will fluctuate. About 15 Diet members are either undecided or have not stated their position.

In the LDP presidential election, LDP Diet members and rank-and-file party members have equal weight among the 810 votes. The candidate who wins a majority will become the new president. The votes of rank-and-file members nationwide will be apportioned using the D’Hondt method.

According to the survey, Abe leads in 39 prefectures, including Iwate and Kanagawa. Meanwhile, Ishiba is ahead in only four prefectures (Ibaraki, Tottori, Shimane, and Kochi). Hokkaido was not surveyed because of the earthquake.

Prime Minister Shinzo Abe said he intends to “accelerate the compilation of a proposal of LDP constitutional amendments so that a bill can be submitted to the next Diet session.” Some 50.6% said they are “in favor of” while 32.0% said they are “opposed” to this.

Asked what policies they would like to see the person elected in the LDP’s presidential election undertake (up to two responses permitted), 35.6% said “economic policies, including employment,” making it the most frequently given response. This was followed by “pensions, healthcare, and nursing care” (33.9%), “security policy and diplomacy” (22.2%), and “fiscal reconstruction” (19.2%). Some 12.7% said “constitutional amendment.”

[Polling methodology: The survey was conducted by telephone on Sept. 7–8. Valid responses were received from 1,525 voters nationwide who indicated they are LDP members or fraternity members. Hokkaido was eliminated from the survey because the entire area suffered substantial damage in the Sept. 6 earthquake.]