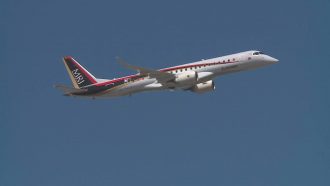 NHK’s “Close-up Gendai+” reported on the ongoing development of Japan’s first domestically produced passenger jet called the Mitsubishi Regional Jet (MRJ), saying that the plane made its first flight at a major air show in July. The program said although the development of the MRJ began ten years ago, the delivery of the jet has been delayed many times, adding that the development did not go smoothly because the project team faced difficulty obtaining type certification from Japan’s aviation authority due to the lack of experience and knowledge of the development team that was originally made up of only Japanese staff. Mitsubishi Heavy Industries reportedly decided to recruit foreign engineers and experts to facilitate the development of the aircraft. As a result, the MRJ is likely to be granted type certification soon. According to the program, mass production of the MRJ may begin as early as next spring and about 500 subsidiaries will be involved in the project. The program said domestic production of the new airplane will have a major impact on the Japanese economy. Mitsubishi Heavy Industries is reportedly aiming to meet the delivery date of 2020, develop for the U.S. market a new model that will carry about 70 passengers, and receive many orders from Asia.