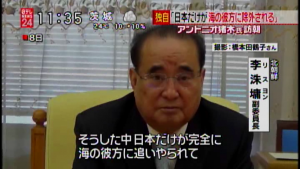 NTV reported that a senior DPRK official told a Japanese parliamentarian last week that Japan will be “isolated” if it continues to maintain a hard line toward the Kim regime. According to the network, when meeting with visiting Upper House lawmaker Antonio Inoki in Pyongyang on Saturday, DPRK Workers’ Party Vice Chairman Ri Su Yong repeatedly criticized the Abe administration’s pressure approach by warning that Tokyo will not be able to play any role in resolving North Korea issues as long as it continues to take a hard line. In a video of the session taken by a person accompanying the Japanese politician, the DPRK official said: “Relations between the DPRK and the U.S. are heading toward a solution…. Japan will be completely pushed to the edge of the ocean and left out of the issue.” Ri reportedly stressed that if Tokyo steps up its pressure and sanctions, Pyongyang will respond correspondingly.