Abe to visit China next month 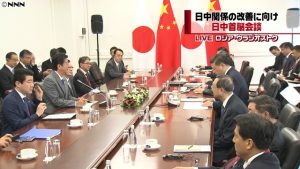 All TV networks reported on this morning’s summit in Vladivostok between Prime Minister Abe and Chinese President Xi, after which the Japanese leader disclosed that they agreed to arrange a trip to China by Abe in October. The premier reportedly told the press: “As this year marks the 40th anniversary of the signing of the Sino-Japanese Peace and Friendship Treaty, I was told that a visit to China by me next month would be welcomed in the context of the relationship of trust that has been built up between us…. The two nations would like to reinforce the foundation of peace and prosperity in Northeast Asia by elevating bilateral relations to a higher stage through realizing reciprocal visits.” Abe also stressed that they agreed to continue close coordination to achieve the denuclearization of North Korea, adding that Xi voiced his “full support” for Japan’s determination to resolve the abduction issue swiftly. NHK speculated that Abe’s trip to China will perhaps be arranged for around Oct. 23, the date when the peace treaty took effect 40 years ago.