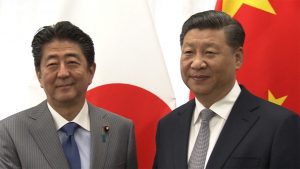 All dailies took up yesterday’s summit held in Vladivostok between Prime Minister Abe and Chinese President Xi, during which the two politicians agreed to expedite coordination for the Japanese leader’s travel to China next month. Asahi asserted that Abe is anxious to highlight the planned visit as the first diplomatic accomplishment under his envisaged third term as the LDP president, while the Chinese side is keen to deepen ties with Japan at a time when its relations with the U.S. have become strained over bilateral trade and North Korea. The paper quoted a Chinese diplomatic source as saying: “It is important to court Japan, which is a U.S. ally. A scenario in which the U.S. and Japan join hands to apply pressure on China must be avoided at all costs.” Nikkei said Xi is conducting a “charm offensive” and has extended overtures to Japan, Europe, and India to prepare for what the daily characterized as a prolonged trade war with the U.S. Pointing out that such thorny issues as the Senkaku dispute have yet to be resolved, Asahi called the two leaders’ accord a “strategic rapprochement.”

Nikkei projected that Abe will probably visit Beijing around Oct. 23, the date when the bilateral peace treaty took effect 40 years ago, adding that he will probably also tour regional areas such as Guangdong and Shenzhen. 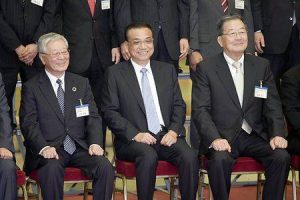 In a related development, all papers wrote that a Japanese business delegation led by Chairman Muneoka of Nippon Steel & Sumitomo Metal paid a courtesy call on Chinese Premier Li in Beijing yesterday and confirmed mutual cooperation on a range of issues, including bilateral commercial projects in third countries. Asahi characterized the economic ties between the two nations as being in a “honeymoon” phase, noting that the two sides are keenly interested in deepening economic cooperation amid rising protectionism in the U.S. The paper added that some Japanese business officials are apprehensive that Japan’s technology could be stolen, as the Chinese government is committed to promoting its “Made in China 2025” initiative, which the Trump administration reportedly views as an attempt to establish technological hegemony.