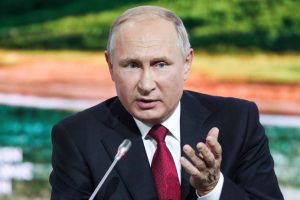 All papers reported heavily on Russian President Putin’s remarks in Vladivostok on Wednesday, in which he proposed concluding a peace treaty with Tokyo this year without preconditions. By saying that Japan and Russia will be able to continue discussions on the Northern Territories dispute after “becoming friends” by concluding a peace treaty, the Russian leader was apparently hinting at his desire to put off addressing the territorial dispute. He also reportedly mentioned the 1956 Japan-Russia Joint Declaration that stipulated the return of Habomai and Shikotan Islands after the signing of a peace treaty, underscoring that the parliaments of the two nations ratified the pact. With this reference, Putin perhaps wanted to justify his idea that talks on the territorial dispute can be conducted even after the conclusion of a peace treaty.

According to the papers, the Russian vice foreign minister disclosed afterward that Putin’s idea had not been presented to the Japanese side beforehand and that it should be discussed with his Japanese counterpart. Asahi speculated that the unexpected proposal was an attempt by Putin to “pull the rug out from under” Japan out of frustration that bilateral negotiations on the contested isles have gone nowhere for many decades despite a series of “new approaches” pursued by the Japanese side, including the latest one advocated by Prime Minister Abe.

According to the dailies, the Japanese government was caught by surprise by the Russian leader’s proposal, which was probably intended to further delay the deadlocked territorial negotiations. Chief Cabinet Secretary Suga commented on it by telling the press yesterday: “We would like to negotiate patiently in line with the basic policy of concluding a peace treaty by resolving the issue of sovereignty of the Northern Territories first. This position will not change.” Japanese officials are reportedly perplexed by what Putin himself called an “off-the-cuff” proposal, wondering whether the Russian leader brought it up as a diplomatic bluff or a serious suggestion to achieve a breakthrough. Yomiuri speculated that Japan will dismiss the proposal in the belief that if heeded, it would make the resolution of the territorial dispute almost impossible. Sankei claimed that Tokyo is treating Putin’s proposal with benign neglect because it was designed to pressure Japan in a bid to attract Japanese business investment amid the prolonged economic slump in Russia.