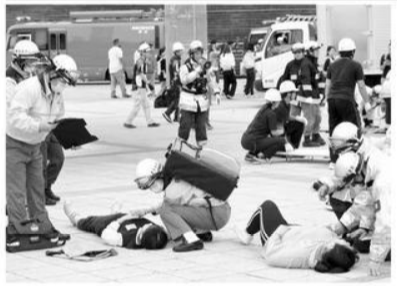 In preparation for the Rugby World Cup and the Tokyo Olympic and Paralympic Games, the City of Yokohama, the Kanagawa Prefectural Police, and others held a joint counterterrorism drill on Sept. 12. The drill was held in front of Nissan Stadium in Kohoku Ward, Yokohama, which will be a venue for the upcoming international events. About 360 people participated in the joint drill and practiced responding to emergencies.

The drill was based on the following scenario:  On the day of a Rugby World Cup match, arson, reckless driving, and gunshots erupt in front of the stadium, and many people are wounded. In the drill, Kanagawa Prefectural Police special unit personnel suppressed gun-carrying terrorists, and emergency and medical personnel performed triage.

The Yokohama City Fire Bureau tried out a new measure where ambulance attendants record the scene on video using tablets and share the information in real time with the command center. The person in charge at the city said, “We will prepare for emergencies by addressing the issues we discovered in the training.”