This Tokyo Scout’s been there, done that, got all the merit badges — and more 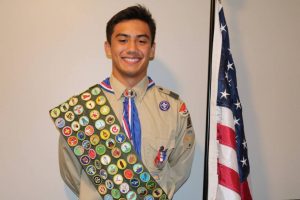 The most decorated Scout in the Boy Scouts of America may not be in the U.S. at all. Meet Austin Koslow from Far East Council Asia East District Troop 16, based in Tokyo.

Koslow has not only earned every single one of the 137 merit badges the Boy Scouts has to offer, but also seven silver and one gold Eagle Palms — the maximum number of the awards attainable after becoming an Eagle Scout. It’s a feat that used to be a mathematical impossibility, until a recent controversial BSA rule change threw open the door. Koslow, it seems, just so happened to be the first Scout to step through it.

While you might imagine Koslow as a single-minded devotee to Scouting from the crib, he was in fact was a slow burner. Growing up in Tokyo as the son of American and Japanese parents working in recruitment, Koslow started as a Cub Scout, the first rung of the ladder in U.S. Scouting, which is open to boys from kindergarten to fifth grade, or 10 years old, but “wasn’t super into it,” he says.

Koslow completed only a handful of badges, but among them was the Arrow of Light, the only Cub Scout award that can be worn on the Boy Scout uniform. Even when it was time to move on to Boy Scouts, he was still just a regular kid enjoying Scouting as an after-school activity. What’s more, he was a key member of the St. Mary’s International School wrestling team, carrying on a strong family tradition in the sport.

“I wasn’t like a super-Scout,” he says of his early years in troop, which is organized by the Mormon church in the Tokyo-Yokohama area. “I had a goal to get Eagle Scout and maybe a couple extra merit badges.”

Becoming an Eagle Scout alone is an impressive feat, requiring not only 21 merit badges but also completion of a service project that benefits an organization other than the Boy Scouts, holding a position of leadership in your troop, taking part in a leadership conference and passing an Eagle Scout board of review.

Koslow clocked in 250 man hours for his Eagle service project. Only 4 percent of Boy Scouts achieve the Eagle rank, and it’s a distinction that can be worn for life.

Becoming an Eagle Scout means joining the ranks of the likes of Neil Armstrong, Gerald Ford and Steven Spielberg.

From age 11 to 15, Koslow earned 16 merit badges — not a bad start, but nothing to write home about, and nowhere near the total number of 137. Around the fire at the end of summer camp, right before he turned 16, Koslow’s scoutmaster told his troop about how his twin sons had attempted to earn all of the merit badges, inspired by a friend of theirs who had been promised a car if he earned the rank of Eagle. While the scoutmaster wasn’t prepared to offer wheels for wings, he said he would match the offer if the twins got all of the merit badges. They earned 70 or 80 badges but then lost interest.

Sitting around the campfire, Koslow thought, “Maybe I can try it too,” although when he later told his dad the story, there was no car on the table. There was, however, a lot of support.

“He said, ‘If you really want to do it, go upstairs and finish one right now,’” Koslow remembers. “And so the 17th merit badge I got was fingerprinting, and that’s known as probably the easiest merit badge — it literally takes an hour, little bit of research and you do a fingerprinting thing of your fingers and that’s it.”

Although the badge itself was nothing special in terms of achievement, “It’s when it clicked and I was like, ‘I want to do this,’” Koslow says. “It was a milestone in a sense — a starting point.”

Koslow, however, did not only get all 137 merit badges, he also earned all of the Eagle Palms. And that’s what sets him apart from other high-flying badge collectors.

When a Boy Scout achieves the rank of Eagle, he can continue to earn merit badges, but only until the age of 18. Every three months, under previous rules he could earn just one additional Eagle Palm for every further five merit badges completed.

Last year, however, all this changed. From August 2017, upon earning the rank of Eagle, Scouts are awarded a palm for every five merit badges they completed as a Boy Scout beyond the 21 minimum required. Koslow waited to present his Eagle Scout project before the board of review till he had all of the existing 137 merit badges. This gave him the opportunity to earn the maximum possible complement of Eagle Palms: seven silver palms (worth 15 badges each) and one gold (worth 10 badges). He also attained the Order of the Arrow and attended the Young Leadership Training Program.

Before this rule change, it was virtually impossible to earn all of the Eagle Palms, although some have claimed the accomplishment. According to the math of meritbadge.org, under the old rules a Scout would have to earn his Eagle rank at age 12 in order to have a chance of earning all of the Eagle Palms before hitting 18. The BSA does not keep track of the boys who have earned all of the merit badges or awards, perhaps in an attempt to keep glory-hungry tiger parents at bay.

While Koslow is coming up on his 18th birthday, this isn’t the end of his Scouting career. “I definitely want to help other Scouts accomplish their goals and get their Eagle or getting all the merit badges or just having fun,” he says. “I would love to be a scoutmaster or an assistant or something like that.”

Koslow stresses that his motivation to achieve his record badge haul came from within, and while he encourages others to challenge themselves, earning all the merit badges does not a Boy Scout make.

“You really learn how to serve people and also you learn about yourself and you can manage time better,” he says of Scouting. “And learn how you learn, in a sense.”

Whether it be backpack or bugle, he’s prepared

Tokyo Eagle Scout Austin Koslow picked some of the highlights and low points of his quest to acquire the full set of 137 merit badges.

While hiking a Buddhist pilgrimage trail in Wakayama Prefecture, Koslow and his friend met a man they called Mori-san who offered them a place to pitch their tents for the night and helped them find the trailhead the next day.

“We were trying to offer him money, like ‘Thank you so much for letting us stay,’ but he wouldn’t take the money,” Koslow explains. “He would just say, ‘If I accept the money that you’re trying to give me, it kind of takes away my opportunity to serve you.’ Boy Scouts is really about service … and it kind of hit me that even non-Scouters, even people who might not know much about Scouting, actually are practicing that.”

“I got to go to Bali for that and I got certified,” Koslow recalls. “It was just an incredible experience. I did it with my little brother and we had an awesome time.”

One of the first badges Koslow earned.

“You had to dive in the pool. I was 11 years old, and you have to go in fully clothed, you know, with jeans, a shirt,” he says. “You have to take off your jeans, tie the ends and blow underneath to make like a flotation device, and the first time I did it I stuck my head in and I couldn’t get my head out and I started to drown, and so my dad had to come and save me. … It wasn’t very fun.”

“This one was actually really cool because we went to the distribution center for McDonald’s.” One of the members of Koslow’s Mormon church brought the troop along on the nightly McDonald’s food and supplies distribution routes. The best part? Free dinner at McDonald’s, of course.

Not for the faint of heart! This one involves building your own shelter from scratch and staying in it overnight. Koslow braved the rain and cold to earn this badge.

Most unusual: mining in society

“A lot of the merit badges have options for kids who maybe have access to a lot of different things versus some city kids who might not be able to go out to an active mine site and kind of interview people there,” Koslow says. “I had to do more internet-based research and things like that.”

This one might appear to be the easiest in terms of requirements — there are only four! — but don’t let that fool you: This one took Koslow almost three years. He had to learn the history, memorize 15 different calls, make up three of his own and serve as his troop’s bugler.