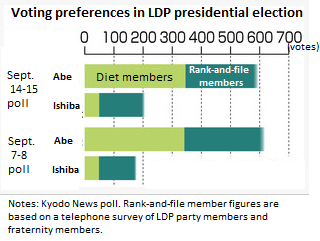 The latest poll conducted Friday and Saturday showed, however, that Abe’s lead had shrunk to 20.6 percentage points from 32.4 points in the previous survey conducted on Sept. 7 and 8.

In the survey, 9.6 percent were undecided or did not state a preference.

The LDP leadership race will effectively determine Japan’s prime minister as the LDP and its junior coalition partner Komeito control both houses of the Diet.

If Abe wins another term, his third and last under existing LDP rules, he will have a better chance of becoming the longest-serving prime minister.

Abe hopes to amend the pacific Constitution for the first time since its promulgation after World War II.

The poll showed 48.2 percent supported Abe’s intention to submit to the next Diet session his party’s proposal for a constitutional revision, while 37.5 percent were opposed.

Lawmakers and rank-and-file members have equal weight with 405 votes each when the LDP presidency is contested.

Abe appears to have secured around 594 of the total 810 votes and Ishiba around 206.

The telephone survey collected valid responses from 1,551 people who said they are ordinary members of the party.