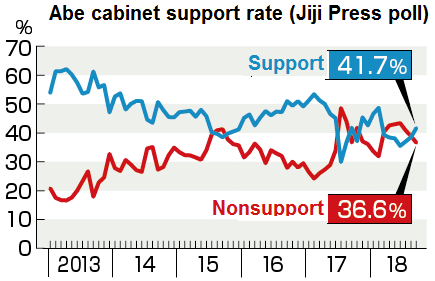 According to the September Jiji Press opinion poll conducted on Sept. 7–10, the approval rate for Prime Minister Shinzo Abe’s cabinet rose by 3.2 percentage points over the previous month to 41.7%. The disapproval rate dropped by 2.3 points to 36.6%. This is the first time in seven months since the February poll that support returned to the 40% range and exceeded nonsupport. Asked for their views about the relocation of Air Station Futenma (Ginowan City, Okinawa Prefecture) to the Henoko district of Nago City, some 36.7% said they are “opposed” while 28.4% they are “in favor” of the government plan. Some 34.9% said they “aren’t sure” or “don’t know.”

The survey was conducted [over the four-day period of Sept. 7–10] through individual interviews. For the survey, a total of 2,000 people were sampled from among men and women, aged 18 and over. The valid response rate was 62.0%.