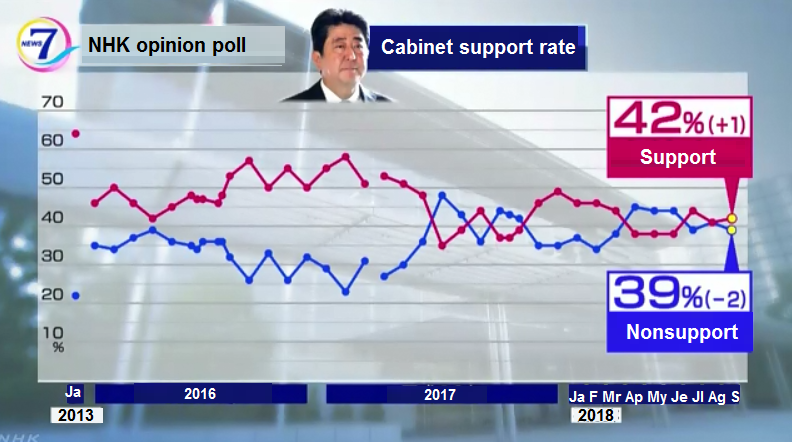 According to the NHK public opinion survey [for the month of September], 42% of pollees support the Abe cabinet, up 1 percentage point from the previous month. Those saying they do not support the cabinet dropped by 2 points to reach 39%.

The nationwide survey was conducted by NHK from Sept. 15 over three days on a computer-aided random digit dialing (RDD) basis and targeted men and women aged 18 or over with calls placed to landline and mobile phone numbers. Valid responses were received from 1,215 of the 2,128 people polled. The valid response rate was 57%.

Prime Minister Abe has said he would like to accelerate debate within the LDP on constitutional amendments so that the LDP proposal can be submitted to the extraordinary Diet session this autumn. Asked if the draft should be submitted, 18% said “yes,” 32% said “there is no need to submit a proposal,” and 40% said they “can’t say either way.”

The question of how to cooperate with other members of the opposition camp was one of the focal issues in the election to determine the next leader of Democratic Party for the People (DPFP). Asked if the DPFP should promote collaboration with other opposition parties with an eye toward the Upper House election next year, some 31% said “yes,” 15% said “there is no need to do so,” and 43% said they “can’t say either way.”